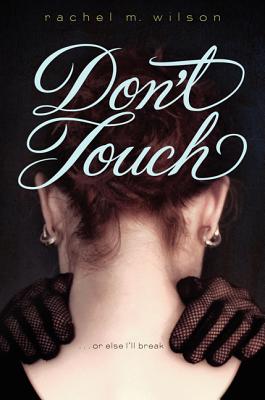 Step on a crack, break your mother's back,
Touch another person's skin, and Dad's gone for good . . .

Caddie has a history of magical thinking—of playing games in her head to cope with her surroundings—but it's never been this bad before.

When her parents split up, Don't touch becomes Caddie's mantra. Maybe if she keeps from touching another person's skin, Dad will come home. She knows it doesn't make sense, but her games have never been logical. Soon, despite Alabama's humidity, she's covering every inch of her skin and wearing evening gloves to school.

And that's where things get tricky. Even though Caddie's the new girl, it's hard to pass off her compulsions as artistic quirks. Friends notice things. Her drama class is all about interacting with her scene partners, especially Peter, who's auditioning for the role of Hamlet. Caddie desperately wants to play Ophelia, but if she does, she'll have to touch Peter . . . and kiss him. Part of Caddie would love nothing more than to kiss Peter—but the other part isn't sure she's brave enough to let herself fall.

From rising star Rachel M. Wilson comes a powerful, moving debut novel of the friendship and love that are there for us, if only we'll let them in.

“A tender love story about the beauty and the risk of showing someone who you really are.”
— Nina LaCour, acclaimed author of Hold Still and The Disenchantments

An insightful look at anxiety disorders and letting go of fear.
— Kirkus Reviews

“Well-written...a good story, the book educates about anxiety disorders and encourages sufferers that all is not lost, a point made in the author’s moving afterword...Libraries where Laurie Halse Anderson and Sara Zarr are popular will want this title.”
— Voice of Youth Advocates (VOYA)

“A vulnerable, moving, and often witty story about the terrible price of self-protection. Plenty of readers, OCD or no, will feel a kinship with Caddie.”
— Bulletin of the Center for Children’s Books

“A poignant introduction to OCD and anxiety disorders.”
— The Horn Book

Rachel M. Wilson received her MFA in writing for children and young adults from Vermont College of Fine Arts. Don't Touch is her first novel. Originally from Alabama, she now lives in Chicago, Illinois.