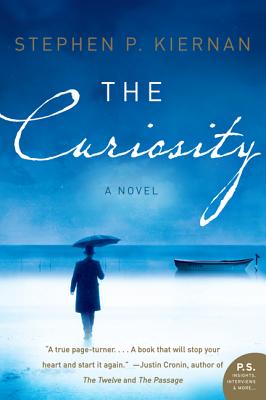 “I've been thinking about Jeremiah Rice a lot since finishing The Curiosity. In this novel a group of scientists have been reanimating small creatures frozen deep in Arctic ice. Upon discovering a man in the ice, Mr. Rice, they bring him back to their lab and try to reanimate him. Imagine a man from 1906 waking up in the world today. Imagine the scientists who stand to make a lot of money and fame for themselves off of such a man. Imagine also the scientists with a moral compass who try to figure out what is best and right in such a situation. I didn't want to put it down and I keep wondering what Jeremiah Rice might think about the way the world has become both good and not so good.”
— Diane Grenkow, The Galaxy Bookshop, Hardwick, VT
View the List

The Curiosity, Stephen Kiernan’s debut novel, is a gripping, poignant, and thoroughly original thriller that raises disturbing questions about the very nature of life and humanity—man as a scientific subject, as a tabloid plaything, as a living being, as a curiosity.…

Dr. Kate Philo and her scientific exploration team make a breathtaking discovery in the Arctic: the body of a man buried deep in the ice. Remarkably, the frozen man is brought back to the lab and successfully reanimated. As the man begins to regain his memories, the team learns that he was—is—a judge, Jeremiah Rice, and the last thing he remembers is falling overboard into the Arctic Ocean in 1906.

Thrown together by circumstances beyond their control, Kate and Jeremiah grow closer. But the clock is ticking and Jeremiah’s new life is slipping away...and all too soon, Kate must decide how far she is willing to go to protect the man she has come to love.

Praise For The Curiosity: A Novel…

“[A] smart, heady, and irresistible science thriller...Kiernan gets every element right in this breakneck, entertaining, and thought-provoking tale about time, mortality, the ethics of science, and the meaning of life.” — Booklist (starred review)

“Stephen P. Kiernan’s The Curiosity is a true page-turner, mixing cutting edge science with an all-too-human love story, while simultaneously taking on the Big Questions. It’s one of the most assured debuts in years, a book that will stop your heart and start it again.” — --Justin Cronin, bestselling author of The Passage

“[THE CURIOSITY] poses provocative questions about life and humanity.” — Entertainment Weekly on THE CURIOSITY