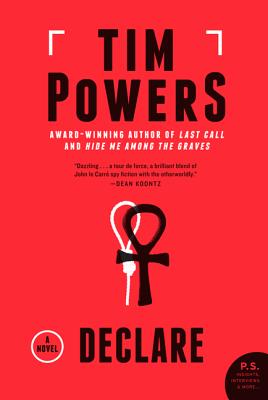 As a young double agent infiltrating the Soviet spy network in Nazi-occupied Paris, Andrew Hale finds himself caught up in a secret, even more ruthless war. Two decades later, in 1963, he will be forced to confront again the nightmare that has haunted his adult life: a lethal unfinished operation code-named Declare.

From the corridors of Whitehall to the Arabian desert, from postwar Berlin to the streets of Cold War Moscow, Hale's desperate quest draws him into international politics and gritty espionage tradecraft—and inexorably drives Hale, the fiery and beautiful Communist agent Elena Teresa Ceniza-Bendiga, and Kim Philby, mysterious traitor to the British cause, to a deadly confrontation on the high glaciers of Mount Ararat, in the very shadow of the fabulous and perilous Ark.


Praise For Declare: A Novel…

“There’s never been a novel quite like DECLARE…one of the protean Powers’s most absorbing and rewarding creations.” — Kirkus Starred Review

“Highly ingenious . . . No one else writes like Powers, and Declare finds him at the top of his game.” — San Francisco Chronicle

“DECLARE is classic Tim Powers, his best novel since Last Call, and possibly his best to date.” — Locus Magazine