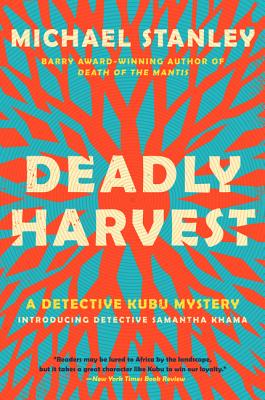 Deadly Harvest in Michael Stanley’s beloved Detective Kubu series tracks a series of murders and a mysterious witch doctor whose nefarious potions might hold the key to a web of missing persons.

When young girls start to go missing, Samantha, a new detective on the Botswana police force suspects that muti, a traditional African medicine, is the reason. She and Detective David “Kubu” Bengu race to stop a serial killer, all as the father of one of the victims threatens to take matters into his own hands.

Weaving together a thrilling mystery with a fascinating look at modern-day Africa, Deadly Harvest is filled with elements suspense and plot twists that will keep you captivated until the very end.

“Kubu is also hugely appealing—big and solid and smart enough to grasp all angles of this mystery. Readers may be lured to Africa by the landscape, but it takes a great character like Kubu to win our loyalty.” — New York Times Book Review

“Assistant Superintendent Kubu is back....Michael Stanley’s enthralling series is a must-read for anyone who enjoys clever plotting, terrific writing, and a fascinating glimpse of today’s Africa.” — Charles Todd, New York times bestselling author of A Matter of Justice

“One of the finest crime thrillers of 2013.” — SHOTS Crime & Thriller Ezine