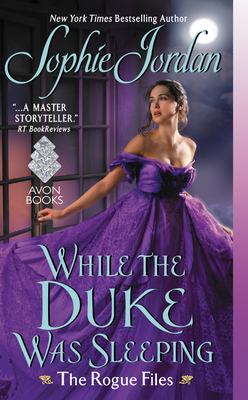 While the Duke Was Sleeping

Sometimes the man of your dreams . . .

Shop girl Poppy Fairchurch knows it’s pointless fantasizing about the Duke of Autenberry. Still, dreams can’t hurt anyone . . . unlike the carriage Poppy spies bearing down upon the unsuspecting duke. After she pulls him to safety, the duke lapses into a coma and Poppy is mistaken for his fiancée. But one person isn’t fooled: his arrogant and much too handsome half-brother, Struan Mackenzie. Soon Poppy isn’t sure what she wants more . . . the fantasy of her duke or the reality of one smoldering Scot who challenges her at every turn.

An illegitimate second son, Struan may have built an empire and established himself as one of the wealthiest men in Britain, but he knows he will always be an outsider among the ton. Just like he knows the infuriating Poppy is a liar. There’s no way the haughty Duke of Autenberry would deign to wed a working class girl. It doesn’t matter how charming she is. Or tempting. Or how much Struan wants her for himself.


Praise For While the Duke Was Sleeping: The Rogue Files…

“An intrepid heroine with a fierce protective streak and the well-to-do bastard son of a duke clash from their first meeting and keep the sparks flying. This sizzling holiday-tinged romance launches a new series with links to Jordan’s popular ‘Debutante Files’ books.”
— Library Journal

“The comparison with the Sandra Bullock movie While You Were Sleeping is inevitable. James has taken the classic and put her own spin on the charming story….the sweetness and enchantment of the story remains with its snappy dialogue and set of engaging characters.”
— RT Book Reviews (4 1/2 stars)

“The novel hews very closely to the plot of its namesake film… but Jordan has added both disdain and heat to the familiar story. The complex characterization and eccentricities of Struan’s relatives refreshingly diverge from typical portrayals of Regency gentry.”
— Publishers Weekly