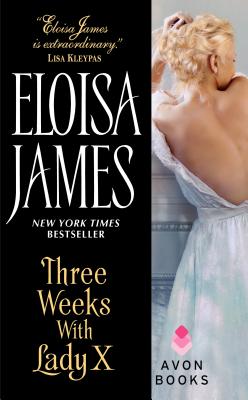 Having made a fortune, Thorn Dautry, the powerful bastard son of a duke, decides that he needs a wife. But to marry a lady, Thorn must acquire a gleaming, civilized façade, the specialty of Lady Xenobia India.

But neither Thorn nor India anticipate the forbidden passion that explodes between them.

Thorn will stop at nothing to make India his. Failure is not an option.

But there is only one thing that will make India his . . . the one thing Thorn can't afford to lose . . . his fierce and lawless heart.

“Romance writing does not get much better than this.”
— People

“Eloisa James writes with a captivating blend of charm, style, and grace that never fails to leave the reader sighing and smiling and falling in love. Her style is exquisite, her prose pure magic. Nothing gets me to a bookstore faster than a new novel by Eloisa James.”
— Julia Quinn

“Eloisa James is extraordinary. With her sensuous and elegant style, inventive plotting and warm, human characters, she makes every book a treasure. A novel by Eloisa is a delicious treat that shouldn’t be missed. A wonderfully original voice in romance fiction!”
— New York Times bestselling author Lisa Kleyps

“Smart heroines, sensual heroes, witty repartee and a penchant for delicious romance have made James a fan favorite…Readers will be hooked from beginning to end.”
— RT Book Reviews (top pick)

“James’ seventh Desperate Duchesses historical (after A Duke of her Own) is her most enticing work to date, replete with sizzling romance and riveting characters….James’ wonderful cast and effortless plotting make this a delicious romance to be savored again and again.”
— Publishers Weekly (starred review)

“Emotionally rewarding and elegantly written, with textured characters and a captivating plot, this is James at her best”
— Kirkus Reviews (starred review)

“Eloisa is also a brilliant writer [...] readers will be enthralled by Lady X and Thorn Dautry as soon as they meet these two willful, formidable characters.
— USA Today, Happily Ever After