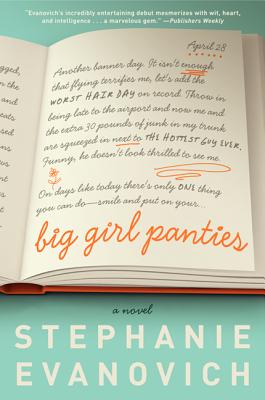 Big Girl Panties by Stephanie Evanovich is a rollicking and poignant romantic comedy about a young widow who decides to get in shape...and winds up getting her groove back—and a whole lot more!

Holly Brennan used food to comfort herself through her husband’s illness and death. Now she’s alone at age thirty-two. And she weighs more than she ever has. When fate throws her in the path of Logan Montgomery, personal trainer to pro athletes, and he offers to train her, Holly concludes it must be a sign. Much as she dreads the thought of working out, Holly knows she needs to put on her big girl panties and see if she can sweat out some of her grief.

Soon, the easy intimacy and playful banter of their training sessions lead Logan and Holly to most intense and steamy workouts. But can Holly and Logan go the distance as a couple now that she’s met her goals—and other men are noticing?

“A page turner with real heart! This sexy tale will have you racing to your local gym-after you’ve finished racing through this charming, funny novel.”
— Rachel Kramer Bussel, editor of Curvy Girls

Stephanie Evanovich began writing fiction while waiting for her cues during countless community theater projects. Now a full-time writer, she’s an avid sports fan who holds a black belt in tae kwon do.