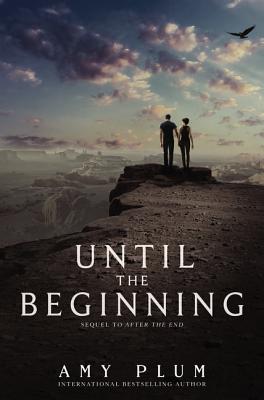 Until the Beginning (After the End #2) (Hardcover)

Amy Plum, internationally bestselling author of the Die for Me series, delivers a heart-pounding adventure perfect for fans of Michael Grant, Veronica Rossi, and Alexandra Bracken. Until the Beginning is the sequel to After the End, which Marie Lu, New York Times bestselling author of the Legend series and the Young Elites series, called “wonderfully riveting.” In this stunning and exhilarating conclusion to the duology, Juneau has been searching for her people and for answers . . . and she is about to find both.

When Juneau’s clan disappeared, she lost so much more than her friends and family. She soon discovered everything she thought she knew about her life was a lie. Her people’s gifts were actually secret abilities that others wanted, desperately enough to kidnap an entire village.

Juneau set off on a cross-country journey with her new companion, Miles, to find her clan, which led them to a game preserve in New Mexico. Now Juneau’s people are finally within reach, and she will stop at nothing to save them. But she has a target on her back too, because unbeknownst to her she is the key to unlocking everything. To rescue her people—and herself—Juneau must discover what she and her abilities are truly capable of.


Praise For Until the Beginning (After the End #2)…

“A satisfying conclusion.”
— ALA Booklist

“There is not a dull page to be found, as action, adventure and romance abound. This heart-pounding book will take you on a journey that you will never want to end.”
— Romantic Times

PRAISE FOR AFTER THE END: “Wonderfully riveting. A fascinating twist on the apocalypse, and a reminder that things aren’t always as they seem.”
— Marie Lu, New York Times bestselling author of the Legend series

“Misunderstandings and betrayals abound as Juneau and Miles set off on a road trip through the West, coming to appreciate each other in a slow-moving, believable romance.”
— Publishers Weekly (starred review)

“The fast-paced plot, rife with mystery, successfully moves the story forward. Fans of post-apocalyptic fiction will enjoy this unusual not-quite-dystopian novel with a dose of corporate espionage. And the cliff-hanger ending will leave them eager for future installments.”
— School Library Journal

“A swashbuckling final episode with plot twists and unexpected revelations.”
— ALA Booklist on If I Should Die

“This last book does not disappoint. Amy Plum is to be congratulated for her creation of the Revenants. It is a fresh and original mythology. It will be interesting to see what Amy Plum will come up with next.”
— New York Journal of Books on If I Should Die
or support indie stores by buying on
Copyright © 2020 American Booksellers Association