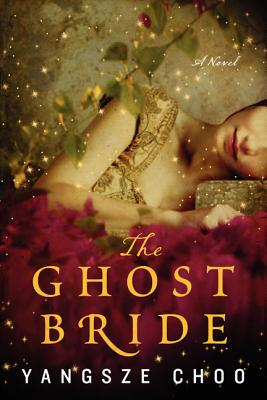 “If Lisa See and Elizabeth Bear collaborated on a book, the result would probably be something like Yangszee Choo's 'The Ghost Bride'. Set on the Malay Peninsula in the late 19th Century, this debut novel tells the story of Li Lan whose father promises her in marriage to the recently-dead son of a wealthy local family as a means of discharging his considerable debt. When the dead son begins visiting Li Lan in her dreams, she becomes increasing desperate to escape him. When an accidental overdose of a sleeping draught separates her sol from her body, she must navigate the world of the dead with the aid of two allies--Fan and Er Lang--neither of whom are whate they appear. Full of danger, romance, and eerie beauty, 'The Ghost Bride' is a fantastical novel about a young girl's quest to find her own destiny and choose love over duty.”
— Billie Bloebaum, Powell's Books At PDX, Portland, OR
View the List

Li Lan, the daughter of a respectable Chinese family in colonial Malaysia, hopes for a favorable marriage, but her father has lost his fortune, and she has few suitors. Instead, the wealthy Lim family urges her to become a “ghost bride” for their son, who has recently died under mysterious circumstances. Rarely practiced, a traditional ghost marriage is used to placate a restless spirit. Such a union would guarantee Li Lan a home for the rest of her days, but at what price?

Night after night, Li Lan is drawn into the shadowy parallel world of the Chinese afterlife, where she must uncover the Lim family’s darkest secrets—and the truth about her own family.


Praise For The Ghost Bride: A Novel…

“Choo’s clear and charming style creates an alternate reality where the stakes are just as high as in the real world, combining grounded period storytelling with the supernatural.”
— Publishers Weekly

“Captivating epic . . . [this] impressive first novel takes readers on one of the wildest rides since Alice fell down the rabbit hole.”
— San Jose Mercury News

“Li Lan’s odyssey keeps her on the brink of earthly demise and keeps the reader riveted to the page . . .”
— New York Journal of Books

“Delicate and thought-provoking . . . sure to be a hit with supernatural and historical fiction fans alike.”
— Library Journal

“Unlike any book I’ve ever experienced, with its meld of historical fiction coupled with a fascinating culture, murder mystery, the wandering of spirits of the dead and not-so-dead, romance, and adventures in the afterworld . . . one revelatory experience after another.”
— Bookreporter.com

Yangsze Choo is a fourth-generation Malaysian of Chinese descent. She lives in California with her husband and their two children, and loves to eat and read (often at the same time).