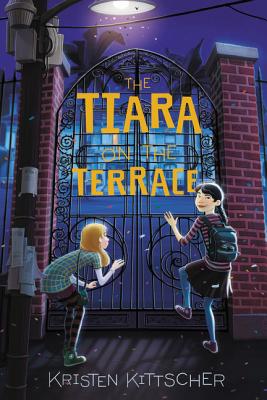 The Tiara on the Terrace

In this funny, clever novel, perfect for fans of Pseudonymous Bosch and Gordon Korman and a companion to The Wig in the Window, tween sleuths Sophie Young and Grace Yang go undercover at Luna Vista's Winter Sun Festival to catch a murderer before he—or she—strikes again.

Sophie Young and Grace Yang have been taking it easy ever since they solved the biggest crime Luna Vista had ever seen. But things might get interesting again now that everyone is gearing up for the 125th annual Winter Sun Festival—a town tradition that involves floats, a parade, and a Royal Court made up of local high school girls.


Praise For The Tiara on the Terrace…

“An entertaining mystery featuring kids who readily outsmart all the adults; what could be better?” — Kirkus Reviews

“The combination of action and reflection will keep readers engaged in the latest mystery from the Young and Yang series.” — Booklist

“Like the first book in the series, this action-packed mystery will have readers on the edge of their seats while at the same time reflecting on the ups and downs of friendship and the insecurities that come along with being a tween.” — School Library Journal

PRAISE FOR THE WIG IN THE WINDOW: “Ample red herrings keep young sleuths and engaged readers guessing in this thrilling debut mystery. Reminiscent of the ever-compelling film Rear Window, this appealing and often spine-tingling tale will leave its audience wishing for more.” — Kirkus Reviews

PRAISE FOR THE WIG IN THE WINDOW: “This fast-paced, action-packed romp has all the ingredients of a great mystery... Readers will see themselves and their friends in Sophie and her classmates, and they will have a difficult time tearing themselves away.” — School Library Journal (starred review)

PRAISE FOR THE WIG IN THE WINDOW: “Kittscher’s debut novel addresses the inevitable rocky periods in middle-school friendships with perceptiveness, honesty, and well-targeted humor” — Publishers Weekly

PRAISE FOR THE WIG IN THE WINDOW: “Funny, realistic, and suspenseful—a pitch-perfect mystery for the tween set.” — --Kate Messner, award-winning author of Capture the Flag

PRAISE FOR THE WIG IN THE WINDOW: “A witty, weird, and wonderful book, The Wig in the Window‘s trouble-making detectives kept me laughing—while the suspense had me inching toward the front of my seat. A perfect middle grade mystery.” — --Kirsten Miller, New York Times best-selling author of Nightmares!

Kristen Kittscher is a writing tutor in Pasadena, California, where she lives with her husband. The 2014 James Thurber House Children's Writer-in-Residence and a graduate of Brown University, she taught middle-school English for many years. She is the author of The Tiara on the Terrace and The Wig in the Window.