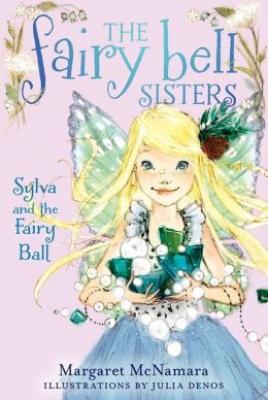 Sylva and the Fairy Ball

“This is a fun new series for early chapter book readers. In Book #1, Sylva wants to go to the fairy ball, but she isn't old enough. When she tries to help her older sisters with their ball gowns, all her plans go awry, but in a delightful twist she manages to save the day. In Book #2, the summer children arrive for one month each year and wreak havoc on the island, forcing the fairies to go into hiding. It isn't until Rosy breaks that rule that children and fairies meet. Denos' charming illustrations bring the fairies' world to life.”
— Janice Hunsche, Kaleidosaurus Books, Fishers, IN
View the List

With Sylva and the Fairy Ball, Margaret McNamara launches the Fairy Bell Sisters, an enchanting new chapter-book series. The books feature Tinker Bell’s little sisters and are a must-read for lovers of the Rainbow Fairies and Disney Fairies stories.

Clara Bell, Golden Bell, Rosy Bell, Sylva Bell, and baby Squeak are fairy sisters who live on Sheepskerry Island. Usually Sylva and her sisters get along just fine—until the week of the Fairy Ball. Sylva has her heart set on going—she’ll get to wear magical diamond wings and walk on beautiful satin ribbons under the stars! But fairies must be at least eight years old to attend, and poor Sylva’s birthday is the day after the ball. But before the night is over, Sylva’s big sisters will need her to come to their rescue.

Charming illustrations by Julia Denos bring the world of fairies to life.

Margaret McNamara is the Christopher Award-winning author of more than two dozen books for young readers, including the Robin Hill School series. The Fairy Bell Sisters series is inspired not only by her love of the classic sisterhood novel Little Women but by her own experiences growing up with older sisters (and a baby brother). Margaret and her family live in New York City, but they spend part of their summer on an island in Maine very much like Sheepskerry Island.

Julia Denos is the author-illustrator of Swatch: The Girl Who Loved Color and the illustrator of several children’s books, including Just Being Audrey by Margaret Cardillo, I Had a Favorite Dress by Boni Ashburn, Dotty by Erica S. Perl, Grandma’s Gloves by Cecil Castellucci, and Letters to Leo by Amy Hest. Julia currently lives in Boston. You can visit her online at www.juliadenos.com.


Praise For The Fairy Bell Sisters #1: Sylva and the Fairy Ball…

“McNamara . . . fills the pages with whimsical details of fairy life, and her knowing narration . . . gives the story its gentle warmth and humor.”
— Publishers Weekly
or
Not Currently Available for Direct Purchase
Copyright © 2020 American Booksellers Association