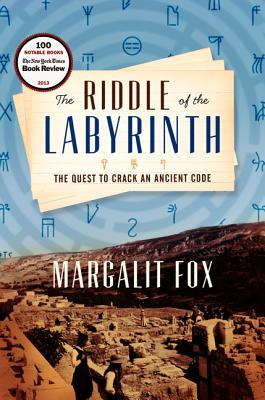 The Riddle of the Labyrinth

Praise For The Riddle of the Labyrinth: The Quest to Crack an Ancient Code…

“Fox is a talented storyteller, and she creates an atmosphere of almost nail-biting suspense. . . . This one deserves shelf space along such classics of the genre as Simon Singh’s The Code Book.”
— Booklist (starred review)

“A fascinating yarn centered around an unlikely heroine. . . . Fox’s deft explanations of the script-solving process allow readers to share in the mental detective work of cracking the lost language.”
— Publishers Weekly

“Fox recreates the emergence of one of history’s most vexing puzzles—and then puts readers alongside the remarkable figures who, brilliantly, obsessively, and even tragically, devoted their lives to solving it. Forget the Da Vinci Code. This is the real thing.”
— Toby Lester, author of Da Vinci's Ghost

“Margalit Fox describes the decipherment of Linear B in such lucid detail that any reader can follow the steps and participate in the thrill of discovery.”
— Stephen Mitchell, translator of Gilgamesh and the Iliad

“Fox’s achievement here is to make this fascinating tale accessible to a broader audience.”
— Washington Post

“… a nail-biting intellectual and cultural adventure.”
— The Times UK

“Deft, sharply written … Fox’s account runs with the pace and tension of a detective story - and has much to say about language and writing systems along the way.”
— The Guardian UK

“[Fox] … has cracked it, fashioning an intellectual puzzle into an engrossing detective story of driven personalities, hidden clues, perseverance and intuition. In the process, she has uncovered a remarkable woman who had been buried by history.”
— Sunday Times UK

“As with any good detective story, there’s a driving narrative behind the puzzle, peopled by solitary sleuths.”
— The Guardian US