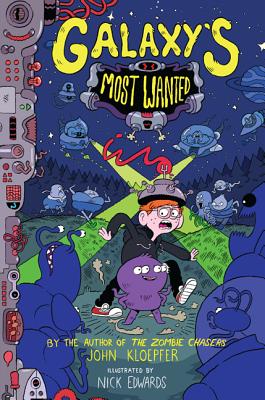 Aliens Attack! When science camp buddies Kevin, Warner, Tara, and TJ summon alien life to earth, they quickly find out that not all extraterrestrials come in peace. Can they stop an alien takeover and save the world in time to win the Invention Convention? John Kloepfer, author of the popular Zombie Chasers books, has done it again. Galaxy's Most Wanted is full of sidesplitting descriptions; a fast-paced, silly plot; a cast of diverse and endearing characters; and a slew of creepy-crawly aliens oozing off the page. With out-of-this-world black-and-white illustrations by Nick Edwards throughout, the first book in this new series is going to blast off!


Praise For Galaxy's Most Wanted…

“Summer camp’s getting a bad rap this year with marauding aliens—kids might want to just stay home and read about it.”
— Bulletin of the Center for Children’s Books

Nick Edwards is a cartoonist, illustrator, and character designer from London, UK. He earned his illustration degree at Brighton University. Nick's work can be seen on Cartoon Network and the Disney Channel, as well as in Dinopopolous, his first comic with Blank Slate Books.