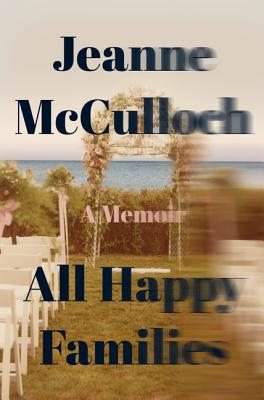 The Glass Castle meets The Nest in this stunning debut, an intimate family memoir that gracefully brings us behind the dappled beachfront vista of privilege, to reveal the inner lives of two wonderfully colorful, unforgettable families.

On a mid-August weekend, two families assemble for a wedding at a rambling family mansion on the beach in East Hampton, in the last days of the area’s quietly refined country splendor, before traffic jams and high-end boutiques morphed the peaceful enclave into the "Hamptons." The weather is perfect, the tent is in place on the lawn.

But as the festivities are readied, the father of the bride, and "pater familias" of the beachfront manse, suffers a massive stroke from alcohol withdrawal, and lies in a coma in the hospital in the next town. So begins Jeanne McCulloch’s vivid memoir of her wedding weekend in 1983 and its after effects on her family, and the family of the groom. In a society defined by appearance and protocol, the wedding goes on at the insistence of McCulloch’s theatrical mother. Instead of a planned honeymoon, wedding presents are stashed in the attic, arrangements are made for a funeral, and a team of lawyers arrive armed with papers for McCulloch and her siblings to sign.

As McCulloch reveals, the repercussions from that weekend will ripple throughout her own family, and that of her in-law’s lives as they grapple with questions of loyalty, tradition, marital honor, hope, and loss. Five years later, her own brief marriage ended, she returns to East Hampton with her mother to divide the wedding presents that were never opened.

Impressionistic and lyrical, at turns both witty and poignant, All Happy Families is McCulloch’s clear-eyed account of her struggle to hear her own voice amid the noise of social mores and family dysfunction, in a world where all that glitters on the surface is not gold, and each unhappy family is ultimately unhappy in its own unique way.


Praise For All Happy Families: A Memoir…

“All Happy Families is a wry and poignant account of a doomed wedding, a house ‘on a perilous dune’ in the Hamptons, and a world of privilege at its vanishing point. Jeanne McCulloch’s take on the American aristocracy is informed by her sharp eye for any sign of pretentiousness and her uncanny ability to render the despair at the heart of every happy family. Think of her as an Edith Wharton for the twenty-first century: we need her wisdom now more than ever.”
— Christopher Merrill, author of Self-Portrait with Dogwood

“An eminently enjoyable take on the infinite tangles and triumphs of family.”
— Booklist

“McCulloch is as wise as she is funny, keen both to the ridiculous excesses of the moneyed class and to the evanescence of commercial beauty, while attentive to the intricate pains of alcoholism and love’s failures that afflict her characters, amidst the splendor.”
— Mona Simpson, author of Casebook and My Hollywood

“...an honest and sensitive portrayal of family dysfunction as well as an evocation of a dying world of old-money wealth and privilege. A poignantly intimate memoir.”
— Kirkus Reviews

“Partly a breezy scene piece, partly a meditation on the familial forces that make us who we are, All Happy Families is a distinct and evocative work.”
— Vogue

Jeanne McCulloch is a former managing editor of the Paris Review, a former senior editor of Tin House magazine, and the founding editorial director of Tin House Books. She is a founding director of the To- dos Santos Writers Workshop. Her writing has appeared in the Paris Review; Tin House; the New York Times; O, The Oprah Magazine; Vogue; Allure; and the North American Review, among other publications. She lives with her family in New York.