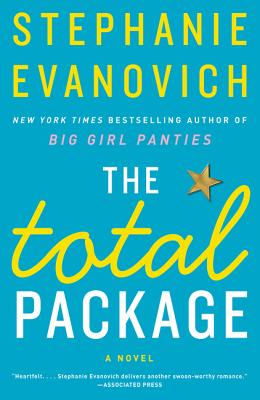 The New York Times bestselling author of Big Girl Panties is back with a funny, sweet, and sizzling novel about love, redemption, and second chances.

Heartthrob star quarterback Tyson Palmer has it all: a million-dollar arm, a winning season and the promise of a Superbowl ring. But more importantly, football’s biggest star is the ultimate comeback kid. After an addiction to painkillers nearly derailed his career, Tyson got sober and went from zero to hero in the eyes of the public.

But one person remains unconvinced: Dani Carr, a sports commentator with high ratings and following of her own.

Dani can’t forgive Tyson’s transgressions or forget a single passionate night with him back in college. To make things worse, Tyson doesn’t realize that the bombshell with huge ratings is the cute co-ed whose heart he once broke.

But can a sports journalist trying to claw her way to the top and a quarterback who knows all about rock bottom make it to the Super Bowl without destroying each other? And what will happen when Tyson—riding high now that he’s revived his career—realizes he needs to make an even more important comeback with Dani? Can he use his million-dollar moves to get past her defenses—or will she sideline him for good?

Stephanie Evanovich is a full-fledged Jersey girl from Asbury Park and the New York Times bestselling author of Big Girl Panties and The Sweet Spot.

Stephanie Evanovich began writing fiction while waiting for her cues during countless community theater projects. Now a full-time writer, she’s an avid sports fan who holds a black belt in tae kwon do.

1. When we first meet Tyson Palmer, he has hit rock bottom: addicted to painkillers and alcohol, dumped by his wife and his team, smeared by a sex scandal. Is Dani the only person who sees a glimmer of hope for him? Does the reader have any sympathy for him at all?

2. Why does Tyson go back to the motel with Dani? Why does she tell him “Quit trying to scare me away”? Who is making the bigger mistake?

3. What do you think of Clinton Barrow and the deal he makes with Tyson? Is he a hero in this book or a villain?

4. Do you agree with Tyson when he says that he thinks it’s “important to follow your dreams, but I don’t think the universe necessarily opens up to help make them happen. If anything, I think the opposite is true, the universe sets up roadblocks to test you on how badly you really want them.” What are his roadblocks and dreams? What are Dani’s? How are they tested?

5. Dani observes that she and her boss both knew “that once she got old, or gained weight, or lost her looks, her job would be given to the next twenty-something in line. Every woman currently on the sidelines knew their clocks were ticking, in one way or another.” Is this cynical or realistic? Does Tyson face a similar ticking clock?

7. When Marcus disappears and Dani realizes that he had been duping her all along, she reflects “Once again, she was getting a shining example of how she was really living in a man’s world. A world she’s always be shut out of.” Was Marcus right to trust Tyson but not Dani?

8. Did Marcus do the right thing by hiding his fiancée and misleading the media about his private life? Would you have done the same in his shoes?

9. What did you make of Tyson’s reaction when Dani finally tells him the truth about their son? Could he have behaved any differently? Would his response have been different if she had told him earlier?

10. Tyson finally forgives his father, and says “I forgive you for me. I know you did the best you could.” Is that true, given the chaos and heartbreak his father had caused? Did Tyson forgive his father too easily?

11. Tyson and Dani reconcile happily and are both on the path to new careers. What do you think happens to them in the years after this story ends? If you were to see them in a future novel by Stephanie Evanovich, what do you think they’d be doing?