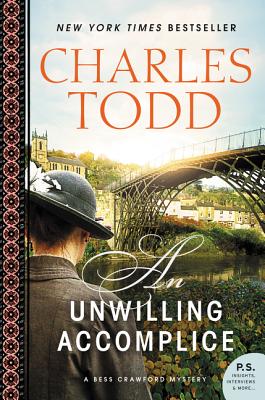 World War I Battlefield nurse Bess Crawford’s career is in jeopardy when a murder is committed on her watch, in this absorbing and atmospheric historical mystery from New York Times bestselling author Charles Todd.

Home on leave, Bess Crawford is asked to accompany a wounded soldier confined to a wheelchair to Buckingham Palace, where he’s to be decorated by the King. The next morning when Bess goes to collect Wilkins, he has vanished. Both the Army and the nursing service hold Bess negligent for losing the war hero, and there will be an inquiry.

Then comes disturbing word from the Shropshire police, complicating the already difficult situation: Wilkins has been spotted, and he’s killed a man. If Bess is to save her own reputation, she must find Wilkins and uncover the truth. But the elusive soldier has disappeared again and even the Shropshire police have lost him. Suddenly, the moral implications of what has happened—that a patient in her charge has committed murder—become more important to Bess than her own future. She’s going to solve this mysterious puzzle, but righting an injustice and saving her honor may just cost Bess her life.

Praise for the Ian Rutledge series: “I love series that follow particular characters over time and through their experiences, so I automatically read the latest installments from ... Charles Todd.” — Hillary Rodham Clinton, New York Times Book Review

‘Todd has a sharp eye for scene and character, and he surrounds his leading lady with a lively cast.” — Washington Times

“A smartly plotted, well-told mystery.” — Booklist on An Impartial Witness

“An Unmarked Grave gives the reader everything they could wish for in a book.” — Bestsellersworld.com

“With every installment, Bess’ stature as a heroine to cherish soars.” — Tampa Tribune

“An intricate plot populated by superbly drawn characters, not least of whom is the captivating and courageous Bess. With seamless prose, “An Unwilling Accomplice” — like all of Todd’s work — offers a moving portrait of war’s physical and emotional devastation.” — Richmond Times-Dispatch on AN UNWILLING ACCOMPLICE

“[AN UNWILLING ACCOMPLICE] truly surprises and takes the series to a whole new level of complexity.” — Bookreporter.com

“With careful attention to such details and a gift for story telling, the Todd team has mastered the art of the historical mystery in the series set in the tragic days of the First World War.” — Iron Mountain Daily News on AN UNWILLING ACCOMPLICE

“Bess is a character with depth and complexity, an army nurse during that awful war, so, like that series, not only intricate mysteries but engrossing historical fiction.’ — SCDemocrat.com on AN UNWILLING ACCOMPLICE