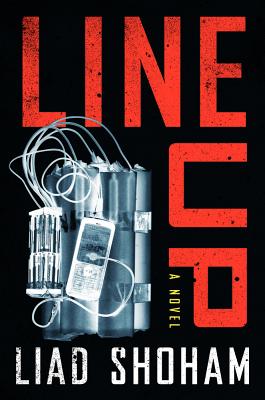 A brutal rape in a quiet Tel Aviv neighborhood has the police baffled. There are no witnesses, suspects, or clues, until the victim’s father steps in and finds overwhelming evidence pointing to Ziv Nevo.

Veteran detective Eli Nahum questions Nevo, but can’t get anything out of him. That’s because Nevo has a secret. He works for the mafia, and telling the truth about why he was near the crime scene could get him killed.

Lineup focuses on these two men, detective and suspect, as they both end up betraying what they value most, fighting for their lives, and struggling make amends for their mistakes in this gritty, fast-paced, complex novel of suspense.

“Lawyer/writer Shoham, dubbed the Israeli John Grisham, delivers a first-rate crime thriller in this first of his works to be translated to English.”
— New York Post

“Lineup will grab you from the opening and take you on a seamless, unstoppable ride.”
— National Examiner

“What begins as a crime thriller becomes the story of a detective’s search for redemption.… Israeli author Shoham’s gritty [novel]…set in Tel Aviv…marks [his]…U.S. debut. Let’s hope he gives us many more stories like it.”
— Kirkus Reviews (starred review)

“There are deals made, budding romances, car bombs that don’t detonate, a wannabe journalist-and a final, very satisfying resolution in which a telescope-bearing bubbe finally spills the beans.”
— Hadassah Magazine

“Liad Shoham has written a crime novel that is compelling on several different levels…. Whether one calls it a mystery, suspense, thriller, or crime novel, one must call it a very, very good book.”
— New York Journal of Books

“Shoham creates a full-blooded thriller in Lineup a novel with multiple shocks but blessedly free of cardboard characters. A smart and absorbing read, it offers readers who prefer thoughtful crime fiction a new voice and a riveting examination of justice systems.”
— Alaska

“Making his U.S. debut, best-selling Israeli author Shoham (the ‘Israeli John Grisham’) has written an enjoyable and compelling thriller that should appeal to fans of urban crime thrillers (such as those by Michael Connelly and Robert Crais).”
— Library Journal

“Set in Tel Aviv, Lineup has a fast-moving narrative…. Shoham manages to write a dark story with a light touch. He doesn’t shy away from the ugly aftereffects of violent crime, but he succeeds in delivering a page-turner with a subtle measure of gallows wit.”
— Ellery Queen Magazine

“An absorbing crime novel...[that reveals] the everyday side to Israeli life.”
— Literary Review

Liad Shoham is Israel's leading crime writer and a practicing attorney with degrees from Jerusalem's Hebrew University and the London School of Economics. All his crime novels have been critically acclaimed bestsellers. He lives in Tel Aviv with his wife and two children.