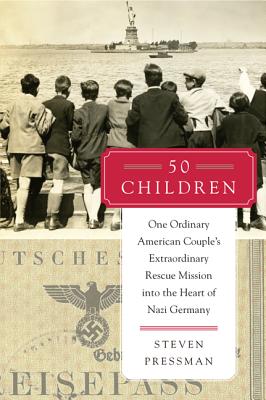 Based on the acclaimed HBO documentary, the astonishing true story of how one American couple transported fifty Jewish children from Nazi-occupied Austria to America in 1939—the single largest group of unaccompanied refugee children allowed into the United States—for readers of In the Garden of Beasts and A Train in Winter.

In early 1939, America's rigid immigration laws made it virtually impossible for European Jews to seek safe haven in the United States. As deep-seated anti-Semitism and isolationism gripped much of the country, neither President Roosevelt nor Congress rallied to their aid.

Yet one brave Jewish couple from Philadelphia refused to silently stand by. Risking their own safety, Gilbert Kraus, a successful lawyer, and his stylish wife, Eleanor, traveled to Nazi-controlled Vienna and Berlin to save fifty Jewish children. Steven Pressman brought the Kraus's rescue mission to life in his acclaimed HBO documentary, 50 Children. In this book, he expands upon the story related in the hour-long film, offering additional historical detail and context to offer a rich, full portrait of this ordinary couple and their extraordinary actions.

Drawing from Eleanor Kraus's unpublished memoir, rare historical documents, and interviews with more than a dozen of the surviving children, and illustrated with period photographs, archival materials, and memorabilia, 50 Children is a remarkable tale of personal courage and triumphant heroism that offers a fresh, unique insight into a critical period of history.


Praise For 50 Children: One Ordinary American Couple's Extraordinary Rescue Mission into the Heart of Nazi Germany…

“Both an extraordinary humanitarian act and a classic tale of American initiative and perseverance....A rich and rewarding read….Pressman paints a moving picture of the rescue.”
— Wall Street Journal

“Excellent…. Pressman, the Krauses’ grandson-in-law, used Eleanor Kraus’s unpublished diaries as well as photographs, documents, and interviews to recreate a historical moment and a heroic act. Like Oskar Schindler and his list, the Krauses and their 50 children will now never be forgotten.”
— Sara Nelson, Amazon Best Book of the Month Citation

“The astonishing story of a Philadelphia couple’s resolve to help bring Jewish children out of Nazi-occupied Austria. . . .With a careful eye to detail and dialogue, Pressman vividly re-creates this epic rescue.”
— Kirkus Reviews

“A brilliantly written book that takes the reader on a journey back in time. Yet, it is relevant today because Gil and Eleanor’s story proves that individuals with courage and strength can overcome the odds. … A very insightful read.”
— Military Press

“[A] stirring account of determination against overwhelming odds….[Pressman’s] flowing narrative breathes life into the America and Europe of 1938-1939,….The whole makes for a story as troubling as it is inspirational.”
— Publishers Weekly

“The portrait of the Krauses that emerges is one of incredible resourcefulness, perseverance, bravery, and motivation to save lives. Pressman’s deeply affecting account is a tribute to a couple whose heroic efforts were a beacon of light during a time of unremitting darkness for the Jewish people.”
— Jewish Book Council

Steven Pressman was a magazine and newspaper journalist for more than thirty years. He is the author of Outrageous Betrayal: The Dark Journey of Werner Erhard from est to Exile, and the writer, director, and producer of the HBO documentary film 50 Children: The Rescue Mission of Mr. and Mrs. Kraus.