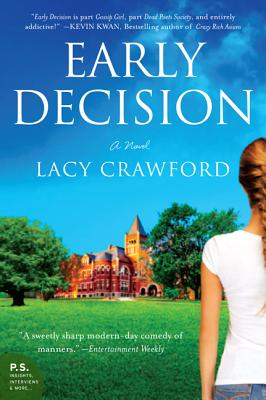 “I nearly cried with laughter over how true to my experience this book is. Lacy Crawford is spot-on in her portrayal of the anxiety, hilarity, and pathos inherent to the college application process.” —Anonymous, SAT Tutor, Veritas


Praise For Early Decision: A Novel…

“Overbearing moms and dads scheming to secure their kid a place at Harvard will find it more helpful than any nonfiction book on the market... everyone else can enjoy Early Decision for what it is: a sweetly sharp modern-day comedy of manners about the brutally competitive college-admissions ordeal.” — Entertainment Weekly

“Here’s an engrossing novel that no parent of college-bound teens will be able to resist...Crawford nails the anxiety of a selection process gone crazy and counsels parents to do the hardest thing of all: back off.” — People

“By focusing on the essay-writing process, Crawford explores how we find our own stories—and suggests that a successful campaign depends on revision.” — Chicago Tribune, Editor's Choice Book

“This entertaining tale of upper class parents and adolescent learning curves points a keen eye at the college application process... with the right support, those students find their way despite themselves. Sprinkled with tips for writers, essays in various forms of rewrite, and a very satisfying twist at the end.” — Publishers Weekly

“At times hilarious, at times soul-crushingly sad, and unfailingly astute and well-written, Early Decision will leave you super-satisfied.” — Redbook.com, October Book of the Month

“Savvy...the hearts of the students beat a true, steady rhythm throughout the novel.” — Booklist

“A book that should get some serious discussions going. Like other dramas, it’s sometimes a comedy... an insider’s view, projected not from the eyes but from the heart.” — Ann Beattie

“Early Decision is part Gossip Girl, part Dead Poets Society, and entirely addictive! A brilliant, satirical peek at the families of privilege behind the Ivy Curtain, this book made me laugh out loud.” — KEVIN KWAN, BESTSELLING AUTHOR OF CRAZY RICH ASIANS.

“this novel about kids caught up in the admissions rat race is wise and completely engrossing.” — People