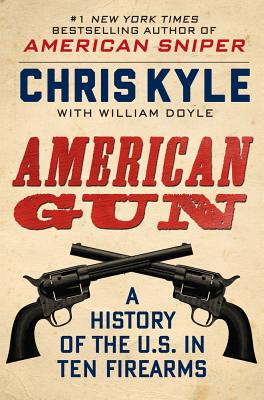 A History of the U.S. in Ten Firearms

Featuring a foreword and afterword by Taya Kyle and illustrated with more than 100 photographs, this new paperback edition features a bonus chapter, “The Eleventh Gun,” on shotguns, derringers, and the Browning M2 machine gun.


Praise For American Gun: A History of the U.S. in Ten Firearms…

“Chris Kyle embodied what it meant to have a heart both strong and soft, and a commitment to country, family, and God. ... Kyle will continue to inspire anyone paying attention to his example.”
— Dallas Morning News

“Chris Kyle has done and seen things that will be talked about for generations to come.”
— MARCUS LUTTRELL, recipient of the Navy Cross and author of Lone Survivor

“A celebration of Kyle’s voice and life: It’s like sitting down with him in some funky Texas roadhouse just off the interstate after a hot but fulfilling day at the range, ordering up a tableful of Lone Stars and just talking guns for a few hours.”
— USA Today

“Kyle’s enthusiasm for his subject is infectious, and his gift for narrative lends the stories the tension and drama they deserve. ... Regardless of one’s views on guns, readers will gain a deeper respect for weaponry and the people tasked with using them.”
— Publishers Weekly (starred review)

“Kyle’s firm grasp of the ten guns selected is combined with a narrative of American soldiers, lawmen, and citizens who used them. ... When you read American Gun you hear the voice, heart, wit, and passion of this self-effacing American hero--one taken from us too soon.”
— Mark Keefe, American Rifleman

“Chris Kyle knew guns in a way no modern American ever has. ... His book new book details the rifles and pistols wielded by soldiers, police officers, hunters, mobsters and outlaws that most influenced the culture of this nation.”
— Daily Mail (London)

“A book that every American should read, and it will stand as part of the legacy of one of our nation’s greatest heroes.”
— American Rifleman

A fitting legacy for Chris Kyle. … American Gun is written with the authority of a subject matter expert and the straight-talking voice of a warrior.”
— SOFREP.com

William Doyle has written or cowritten seven books, including PT 109: An American Epic of War, Survival, and the Destiny of John F. Kennedy and American Gun: A History of the U.S. in Ten Firearms (with “American Sniper” Chris Kyle). He served as director of original programming for HBO and was coproducer of the PBS special Navy SEALs: Their Untold Story. He lives with his family in New York City.