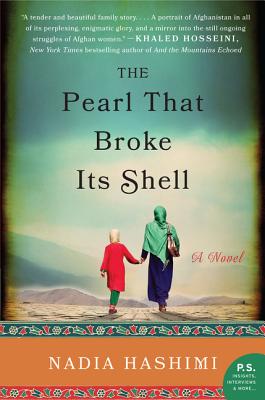 The Pearl That Broke Its Shell

Afghan-American Nadia Hashimi's literary debut novel is a searing tale of powerlessness, fate, and the freedom to control one's own fate that combines the cultural flavor and emotional resonance of the works of Khaled Hosseini, Jhumpa Lahiri, and Lisa See.

In Kabul, 2007, with a drug-addicted father and no brothers, Rahima and her sisters can only sporadically attend school, and can rarely leave the house. Their only hope lies in the ancient custom of bacha posh, which allows young Rahima to dress and be treated as a boy until she is of marriageable age. As a son, she can attend school, go to the market, and chaperone her older sisters.

But Rahima is not the first in her family to adopt this unusual custom. A century earlier, her great-great grandmother, Shekiba, left orphaned by an epidemic, saved herself and built a new life the same way.

Crisscrossing in time, The Pearl the Broke Its Shell interweaves the tales of these two women separated by a century who share similar destinies. But what will happen once Rahima is of marriageable age? Will Shekiba always live as a man? And if Rahima cannot adapt to life as a bride, how will she survive?


Praise For The Pearl That Broke Its Shell: A Novel…

“Nadia Hashimi has written, first and foremost, a tender and beautiful family story. Her always engaging multigenerational tale is a portrait of Afghanistan in all of its perplexing, enigmatic glory, and a mirror into the still ongoing struggles of Afghan women.” — Khaled Hosseini, author of And the Mountains Echoed and The Kite Runner

“A fascinating look at the unspoken lives of Afghani women, separated by generations and miles, yet achingly similar. This is a story to transport you and make you think.” — Shilpi Somaya Gowda, New York Times bestselling author of Secret Daughter

Rahima says that Khala Shaima's story about Bibi Shekiba transformed her, and indeed, this is a novel about transformation. In what ways, besides dressing as males, do Rahima and Shekiba transform themselves?

When we first meet Khala Shaima, we see that men frequently mock or insult her because of her crooked spine, but her nieces and sister don't seem to pity her. Does Khala Shaima's disability work to her advantage?

Rahima loves being bacha posh for the freedoms it brings; being able to work in the market, play soccer, and go to school. What are the disadvantages of her newfound freedoms and what are the consequences for Rahima and her family?

Rahima says of her sister Parwin: “In some ways, I think she was the bravest of all. She, my meek and timid sister, was the one who acted in the end. She was the one who showed those around her that she'd had enough of their abuse. As Khala Shaima said, everyone needed a way to escape.” Do you agree?

Shekiba envies the women of the harem: “At least they belonged to someone. At least they had someone to care for them, to look after them.” Do you think the King's concubines live an enviable life? Are they better or worse off than women who live outside the palace walls?

The word naseeb, or destiny, comes up often in The Pearl that Broke Its Shell, as each woman is repeatedly told that she must accept her fate. When Rahima asks Khala Shaima “Wouldn't people say that is blasphemous? To change the naseeb that Allah has for us?” her aunt responds “…you tell me which of those people who say such a thing have spoken with Allah to know what the true naseeb is.” When do Shekiba and Rahima accept their naseeb and when do they rebel against it? Do you believe in the concept of naseeb in your

What do you make of Shekiba and Rahima's experiences with their husbands' other wives? Are they helped or harmed by them? Could you adapt to that kind of married life?

When Bibi Gulalai opens up to Rahima about her own abusive mother-in-law, Rahima thinks “In other circumstances, I might have told Bibi Gulalai that I understood, that I could sympathize with her.” Does Bibi Gulalai's revelation change the way you see her? What inspires or empowers the cruelty of older women like her and Shekiba's grandmother, Bobo Shahgul?

How do Rahima's years as a bacha posh ultimately help her escape her marriage to Abdul Khaliq?

Do you believe that Rahima and Shekiba's stories end happily? What do you think became of them in the years after this book ends?