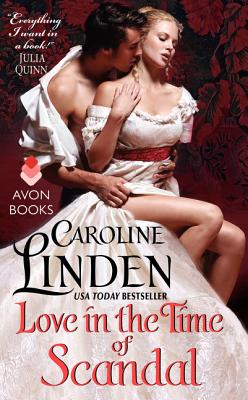 Love in the Time of Scandal

USA Today bestselling author Caroline Linden's third novel in her Scandalous series brings together a feisty heiress, a notorious rake, and a shocking book that could bring one woman the utmost despair— or the greatest pleasure.

Penelope Weston does not like Benedict Lennox, Lord Atherton. He may be the suave and charming heir to an earl, as well as the most handsome man on earth, but she can't forget how he abandoned a friend in need— nor how he once courted her sister, Abigail. He's the last man she would ever marry. If only she didn't feel so attracted to the arrogant scoundrel . . .

Once upon a time, Benedict thought he and Penelope got along rather well. Though he needs a wealthy bride to escape his cruel father's control, spirited Penelope just doesn't suit his plans for a model marriage—until a good deed goes awry, and scandalous rumors link his name to Penelope's. She might not be the quiet, sensible wife he thought he wanted, but she is beautiful . . . beguiling . . . and far more passionate than he ever imagined. Can a marriage begun in scandal become a love match, too?


Praise For Love in the Time of Scandal…

“Whispers, rumors and scandal make for a delicious tale when mixed with murder, treasure and passion. Linden enchants readers with her engaging characters - especially the bold heroine - who light up the page with their enthusiasm for life and love, compelling readers to smile and savor this lovely story.”
— Romantic Times Book Reviews on IT TAKES A SCANDAL

“Linden manages to combine historical detail with romance and a bit or erotica to create an engrossing historical fiction.”
— Examiner on IT TAKES A SCANDAL

“A poignant mystery woven throughout the plot adds depth to both Sebastian’s character and the overall story, perfectly balanced by the deft writing of Linden. It Takes a Scandal delivers on every level, and is one you shouldn’t miss!”
— Reader to Reader on IT TAKES A SCANDAL

“IT TAKES A SCANDAL is a beautifully written and charming romance…I enjoyed the book immensely and have no hesitation in recommending it to anyone who enjoys a heartfelt, emotionally satisfying and sensual romance.”
— All About Romance ("Desert Island Keeper" Top Rated Review) on IT TAKES A SCANDAL

“OUTSTANDING AND WELL DONE!!”
— Addicted to Romance on IT TAKES A SCANDAL

“If you enjoy historic romance…with a good mystery and great characters then this is a MUST READ!”
— Fangs, Wands and Fairy Dust on IT TAKES A SCANDAL

“The London of 1822 sizzles in Linden’s third Scandalous novel (after It Takes a Scandal)…Penelope is an especially engaging protagonist-an outspoken and historically accurate feminist-and readers will share Ben’s growing appreciation for her thoughtful mind and clever words.”
— Publishers Weekly on LOVE IN THE TIME OF SCANDAL

“A smart, poignant, deftly written romance with characters who remind us that good can triumph and love can heal.”
— Kirkus on LOVE IN THE TIME OF SCANDAL

“Linden has a knack for merging emotional plots with heated love scenes, and succeeds at delivering another satisfying read.”
— RT Book Reviews on LOVE IN THE TIME OF SCANDAL

“Love in the Time of Scandal’s shrewdly matched protagonists, abundance of heady sexual chemistry, and satisfying measure of sharp wit and snappy banter make it a stellar addition to RITA award-winning Linden’s fabulously entertaining Scandalous series.”
— Booklist (starred review) on LOVE IN THE TIME OF SCANDAL

“Likable, flawed characters; an abundance of hot, passionate sex (helped along by Lady Constance and her notorious 50 Ways To Sin pamphlets); and a host of concerns that need sorting out result in a fast-paced, occasionally dangerous adventure.”
— Library Journal on LOVE IN THE TIME OF SCANDAL