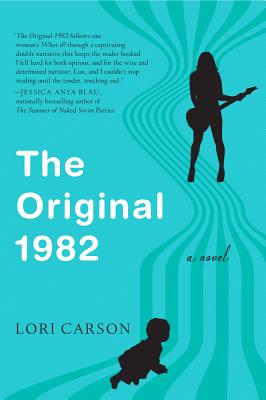 The Original 1982 is the wise and memorable debut novel of love, regret, music, and motherhood, by singer and songwriter Lori Carson of the Golden Palominos.

It’s 1982, and Lisa is a 24-year-old waitress in New York City, an aspiring singer/songwriter, and girlfriend to a famous musician. That year, she makes a decision, almost without thinking about it.

But what if what if her decision had been different?

In a new 1982, Lisa chooses differently. Her career takes another direction. She becomes a mother. She loves differently—yet some things remain the same.

“Meaningful...Carson’s soft-lit prose never gets too romantic — and, most remarkably, she doesn’t pass judgment, instead chronicling the ups and downs of two fates unfolding with rueful realism. Mothers and others will appreciate her approach.” — NPR

“Carson hasn’t abandoned music completely; all the musicality of nuanced emotion can be found in the distilled beauty of her delicate prose. The music world may be losing a voice of quietly impassioned grace, but the literary world has easily and fortunately gained one.” — PopMatters

“A lyrical story of love, longing, and acceptance. Beautifully imaged and authentically told, the result is a deeply meaningful exploration of an often painful subject.” — Booklist

“A daring, thoughtful book -- delightfully unpretentious and full of love. THE ORIGINAL 1982 deftly explores the ways in which even what seem like the wrong choices can lead us in the right direction.” — Alethea Black, author of I Knew You'd Be Lovely

“THE ORIGINAL 1982 follows one woman’s what if? through a captivating double narrative that keeps the reader hooked. I fell hard for both options, and for the wise and determined narrator, Lisa, and I couldn’t stop reading until the tender, touching end.” — Jessica Anya Blau, author of The Wonder Bread Summer

“Carson writes about regret, desire, and most of all, love in its many forms with grace and sensitivity. This is a novel of deep sympathy and enormous heart, an impressive debut.” — Christine Sneed, author of the novel Little Known Facts

Lori Carson is a singer-songwriter whose albums include Shelter, Where It Goes, Everything I Touch Runs Wild, and Another Year. A former member of the seminal band The Golden Palominos, she has contributed to the sound tracks of Bernardo Bertolucci's Stealing Beauty, Kathryn Bigelow's Strange Days, Keith Gordon's Waking the Dead, and others. The Original 1982 is her first novel.