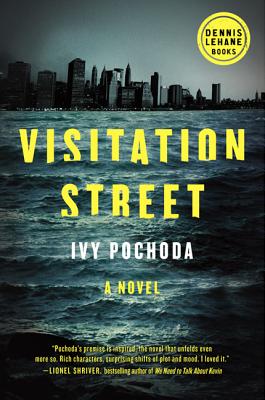 Chosen by Dennis Lehane for his eponymous imprint, Ivy Pochoda’s Visitation Street is a riveting literary mystery set against the rough-hewn backdrop of the New York waterfront in Red Hook.

It’s summertime in Red Hook, Brooklyn, a blue-collar dockside neighborhood. June and Val, two fifteen-year-olds, take a raft out onto the bay at night to see what they can see.

And then they disappear. Only Val will survive, washed ashore; semi-conscious in the weeds.

This shocking event will echo through the lives of a diverse cast of Red Hook residents. Fadi, the Lebanese bodega owner, hopes that his shop will be the place to share neighborhood news and troll for information about June’s disappearance. Cree, just beginning to pull it together after his father’s murder, unwittingly makes himself the chief suspect, but an enigmatic and elusive guardian is determined to keep him safe.

Val contends with the shadow of her missing friend and a truth she buries deep inside. Her teacher Jonathan, a Julliard School dropout and barfly, wrestles with dashed dreams and a past riddled with tragic sins.

“Visitation Street explores a community’s response to tragedy with crystalline prose, a dose of the uncanny, and an unblinking eye for both human frailty and resilience. Marvelous.”
— Deborah Harkness, bestselling author of A Discovery of Witches

“Ivy Pochoda makes the saltiness of Brooklyn’s Red Hook come to life so vividly that every time I looked up from the pages of this intoxicating novel, I was surprised not to be there. Visitation Street is imbued with mystery and danger.
— Emma Straub, author of Laura Lamont's Life in Pictures

“Visitation Street [is] beautiful, haunting. Ivy Pochoda brings forth the full palette of human emotions in this gripping urban drama, a story that hurts you on one page and gives you hope on the next. A marvelous novel.”
— Michael Koryta, award winning author of So Cold the River

“Rich with characters and mood . . . Red Hook itself feels like a character-hard-worn, isolated from the rest of New York, left behind and forgotten. A terrific story in the vein of Dennis Lehane’s fiction.”
— Kirkus Reviews (starred review)

“Visitation Street has a wonderfully eerie and intriguing premise...but it’s the evocation of place, the spot-on rendering of a diverse cast of characters, and the poetic pitch of the writing that elevates the book into the sphere of literature.”
— Library Journal

“[R]iveting...will keep readers enthralled until the final page. The prose is so lyrical and detailed that readers will easily imagine themselves in Red Hook. A great read for those who enjoy urban mysteries and thrillers with a literary flair.”
— Library Journal (starred review)