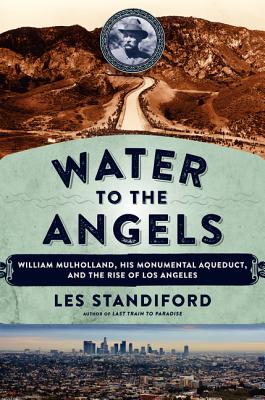 Water to the Angels (Hardcover)

William Mulholland, His Monumental Aqueduct, and the Rise of Los Angeles

The author of Last Train to Paradise tells the story of the largest public water project ever created—William Mulholland’s Los Angeles aqueduct—a story of Gilded Age ambition, hubris, greed, and one determined man who's vision shaped the future and continues to impact us today.

In 1907, Irish immigrant William Mulholland conceived and built one of the greatest civil engineering feats in history: the aqueduct that carried water 223 miles from the Sierra Nevada mountains to Los Angeles—allowing this small, resource-challenged desert city to grow into a modern global metropolis. Drawing on new research, Les Standiford vividly captures the larger-then-life engineer and the breathtaking scope of his six-year, $23 million project that would transform a region, a state, and a nation at the dawn of its greatest century.

With energy and colorful detail, Water to the Angels brings to life the personalities, politics, and power—including bribery, deception, force, and bicoastal financial warfare—behind this dramatic event. At a time when the importance of water is being recognized as never before—considered by many experts to be the essential resource of the twenty-first century—Water to the Angels brings into focus the vigor of a fabled era, the might of a larger than life individual, and the scale of a priceless construction project, and sheds critical light on a past that offers insights for our future.

Water to the Angels includes 8 pages of photographs.

Les Standiford is the bestselling author of twenty books and novels, including the John Deal mystery series, and the works of narrative history The Man Who Invented Christmas (a New York Times Editors’ Choice) and Last Train to Paradise. He is the director of the creative writing program at Florida International University in Miami, where he lives with his wife, Kimberly, a psychotherapist and artist. Visit his website at www.les-standiford.com.


Praise For Water to the Angels: William Mulholland, His Monumental Aqueduct, and the Rise of Los Angeles…