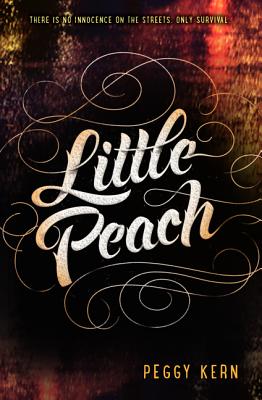 A riveting and powerful story of a runaway girl lured into prostitution in New York City, perfect for fans of Ellen Hopkins and Patricia McCormick.

What do you do if you're in trouble?

When Michelle runs away from her drug-addicted mother, she has just enough money to make it to New York City, where she hopes to move in with a friend. But once she arrives at the bustling Port Authority, she is confronted with the terrifying truth: She is alone and out of options.

Then she meets Devon, a good-looking, well-dressed guy who emerges from the crowd armed with a kind smile, a place for her to stay, and eyes that seem to understand exactly how she feels. But Devon is not who he seems to be, and soon Michelle finds herself engulfed in the world of child prostitution, where he becomes her "Daddy" and she is his "Little Peach." It is a world of impossible choices, where the line between love and abuse, captor and savior, is blurred beyond recognition.

This hauntingly vivid story illustrates the human spirit's indomitable search for home and one girl's struggle to survive.

“Little Peach is a powerful and deeply poignant look at human trafficking. The way it really is. The victims are among us, hiding in plain sight, but it took a writer of Peggy Kern’s talent to reveal them with such compassion and authenticity.”
— Patricia McCormick, two time National Book Award finalist and author of SOLD and NEVER FALL DOWN

“Palpable and heartbreaking”
— Bulletin of the Center for Children’s Books

“A[n]…unsettling portrait of girls who become trapped by thinking they are out of options.”
— Publishers Weekly

Peggy Kern has written two books for the Bluford Series. She lives with her daughter in Massachusetts.