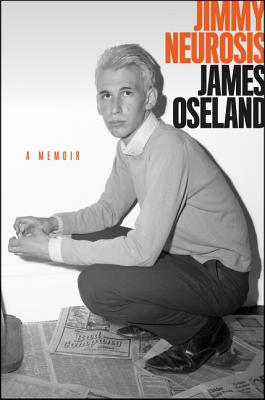 From a celebrated figure of the food world comes a poignant, provocative memoir about being young and gay during the 1970s punk revolution in America

Long before James Oseland was a judge on Top Chef Masters, he was a teenage rebel growing up in the pre–Silicon Valley, California, suburbs, yearning for a taste of something wild. Diving headfirst into the churning mayhem of the punk movement, he renamed himself Jimmy Neurosis and embarked on a journey into a vibrant underground world populated by visionary musicians and artists.

In a quest that led him from the mosh pits of San Francisco to the pop world of Andy Warhol’s Manhattan, he learned firsthand about friendship of all stripes, and what comes of testing the limits—both the joyous glories and the unanticipated, dangerous consequences.

With humor and verve, Oseland brings to life the effervescent cocktail of music, art, drugs, and sexual adventure that characterized the end of the seventies. Through his account of how discovering his own creativity saved his life, he tells a thrilling and uniquely American coming-of-age story.


Praise For Jimmy Neurosis: A Memoir…

“Affecting . . . Here we see the power of the punk scene before it grows corrupted, and even of those brief flashes of intimacy, physical or otherwise, which Oseland shares with his anonymous partners, a strategy to expose and, in some way, to mitigate his vulnerability and loneliness.”
— Los Angeles Times

“It ain’t easy being a gay adolescent punk-rocker in suburbia but this heroic book proves you can survive conventional society’s assholism if you believe in your own style and find an outlaw culture to welcome you in before you go off the deep end.”
— John Waters

“A page-turner about a timid adolescent who hurls himself out of 1970s suburban California into New York and San Francisco’s electric gay scenes. This gripping and inspired tale of the artist as a young man vividly shows that it does in fact get better.”
— Andre Aciman, author of Call Me by Your Name

“I rooted for Jimmy Neurosis on every page of this brave, engrossing, deeply touching memoir.”
— Francine Prose, author of What to Read and Why

“In this triumphant book, James Oseland not only reminds you how hard it is to be teetering on the edge of adulthood, but also what it takes to move forward.  For the first time in my life I finally understand the appeal of Punk Rock.”
— Ruth Reichl, author of Tender at the Bone

“Nonstop entertainment with an irreverent voice and a beautiful lens over a golden age now gone.”
— Out Magazine, “9 Queer Books to Read This Month”

James Oseland has won multiple James Beard and National Magazine Awards for his writing and editing. He is the author and editor of World Food, a book series from Penguin Random House. Before that, he was the editor of Saveur, America’s most critically acclaimed food magazine. He was a series judge on all five seasons of Bravo’s Top Chef Masters, and has appeared on Celebrity Apprentice, Iron Chef America, and the Today show. He is also the author of Cradle of Flavor, which was named one of the best books of the year by the New York Times and Good Morning America. He lives in Mexico City.