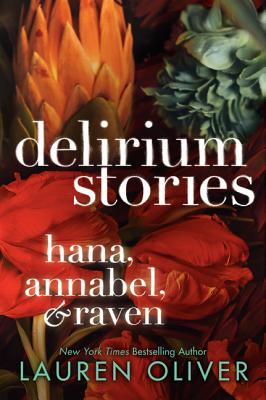 For the first time, Lauren Oliver's short stories about characters in the Delirium world appear in print. Originally published as digital novellas, Hana, Annabel, and Raven each center around a fascinating and complex character who adds important information to the series and gives it greater depth. This collection also includes an excerpt from Requiem, the final novel in Oliver's New York Times bestselling series.

Hana is told through the perspective of Lena's best friend, Hana Tate. Set during the tumultuous summer before Lena and Hana are supposed to be cured, this story is a poignant and revealing look at a moment when the girls' paths diverge and their futures are altered forever.

Lena's mother, Annabel, has always been a mystery—a ghost from Lena's past—until now. Her journey from teenage runaway to prisoner of the state is a taut, gripping narrative that expands the Delirium world and illuminates events—and Lena—through a new point of view.

And as the passionate, fierce leader of a rebel group in the Wilds, Raven plays an integral role in the resistance effort and comes into Lena's life at a crucial time. Crackling with intensity, Raven is a brilliant story told in the voice of one of the strongest and most tenacious characters in the Delirium world.

Praise for REQUIEM: “Is there a theme more perfect for YA readers than choosing what you want from life rather than being told?” — Booklist

Praise for PANDEMONIUM: “From the grief-stricken shell of her former self to a nascent refugee and finally to a full-fledged resistance fighter, Lena’s strength and the complexity of her internal struggles will keep readers up at night.” — Kirkus Reviews (starred review)

Praise for PANDEMONIUM: “This is a romance in the purest of senses, where just the longing for the faintest taste of love is worth the greatest of risks. Like all successful second volumes, this expands the world and ups the stakes, setting us up for the big finale.” — Booklist

Praise for PANDEMONIUM: “Following directly on the heels of Delirium, Pandemonium is equally riveting. The underlying theme that love will win out regardless of prohibition is a powerful idea that will speak to teens.” — School Library Journal