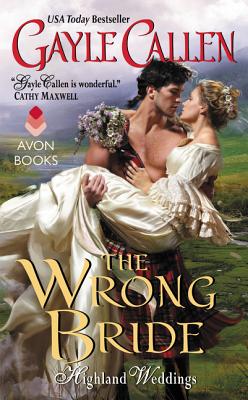 USA Today bestselling author Gayle Callen creates an unforgettable story of mistaken identity and irresistible attraction in this first in a wonderfully engaging series set in the Scottish Highlands.

Shaken from sleep during the night and bundled off to the Highlands by a burly Scot, Riona is at first terrified, then livid. Hugh McCallum insists they were promised to each other as children to ensure peace between their clans. The stubborn laird refuses to believe he's kidnapped the wrong Catriona Duff. Instead, he embarks on a campaign of slow-burning seduction.

At first, Hugh cares only what their marriage can do for his people. Now he's starting to crave Riona for her own sake, but her true identity jeopardizes his clan's contract. And unless she chooses to risk all to be his bride, he'll lose the only thing he prizes more than the lands he's fought so hard to save—the passionate marriage they could have together.

After a detour through fitness instructing and computer programming, Gayle Callen found the life she'd always dreamed of as a romance writer. This USA Today bestselling author has written more than twenty historical romances for Avon Books, and her novels have won the Holt Medallion, the Laurel Wreath Award, the Booksellers' Best Award, and been translated into eleven different languages. The mother of three grown children, an avid crafter, singer, and outdoor enthusiast, Gayle lives in Central New York with her dog, Uma, and her husband, Jim the Romance Hero. She also writes contemporary romances as Emma Cane.