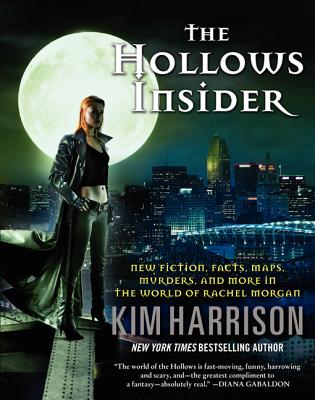 New Fiction, Facts, Maps, Murders, and More in the World of Rachel Morgan

Enter the world of the Hollows like never before!

In the Hollows, the supernatural Inderlander rule, and humanity must abide by their conventions, or else.

To survive among vampires, witches, Weres, gargoyles, trolls, fairies, and banshees—to say nothing of demons—humanity needs a guide. And now, written by Kim Harrison herself, here is an insider's look at the supernatural world of the Hollows, from an overarching new story to character profiles, maps, spell guides, charm recipes, secret correspondence from elusive Trent Kalamack, and much more.

One misfired spell that burned off his hair is all it took to send investigative reporter Devin Crossman on a mission to uncover all the secrets of Rachel Morgan and expose them to the world.

Collected here are all his notebook entries and a treasure trove of evidence, including maps, species profiles, magic spells, documents from Inderland Security, Takata's song lyrics, Betty Bob's recipes, Ley Line Charms, entries from the Were Registry, articles from The Hollows Gazette, and many more documents that cast light into regions of the Hollows that have never been revealed.

But Crossman's one-man war has not gone unnoticed . . .


Praise For The Hollows Insider: New Fiction, Facts, Maps, Murders, and More in the World of Rachel Morgan…

“I wouldn’t miss a Kim Harrison book for anything.”
— Charlaine Harris

“The pace and tone of A Perfect Blood reflects its protagonist: a little more cautious, reflective and purposeful, and the book is more powerful as a result…Harrison provides the strongest and most self-assured Rachel we’ve seen yet.”
— Miami Herald on A PERFECT BLOOD

“You’ll love this bounty-hunter team. DEAD WITCH WALKING is a fun-fair ride through a fascinating version of our world.”
— Charlaine Harris on Dead Witch Walking