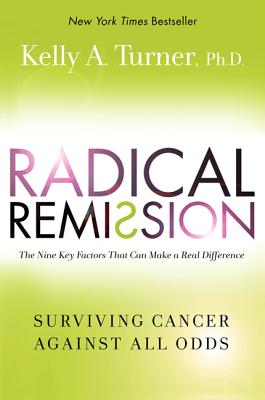 Surviving Cancer Against All Odds

In her New York Times bestseller, Radical Remission: Surviving Cancer Against All Odds, Dr. Kelly A. Turner, founder of the Radical Remission Project, uncovers nine factors that can lead to a spontaneous remission from cancer—even after conventional medicine has failed.

While getting her Ph.D. at the University of California, Berkley, Dr. Turner, a researcher, lecturer, and counselor in integrative oncology, was shocked to discover that no one was studying episodes of radical (or unexpected) remission—when people recover against all odds without the help of conventional medicine, or after conventional medicine has failed.  She was so fascinated by this kind of remission that she embarked on a ten month trip around the world, traveling to ten different countries to interview fifty holistic healers and twenty radical remission cancer survivors about their healing practices and techniques. Her research continued by interviewing over 100 Radical Remission survivors and studying over 1000 of these cases.  Her evidence presents nine common themes that she believes may help even terminal patients turn their lives around.


Praise For Radical Remission: Surviving Cancer Against All Odds…

Never before has anyone with Dr. Turner’s credentials dared to research the million dollar question: why do some patients get better from seemingly “incurable” illnesses? Dr. Turner has uncovered the holy grail those who want to optimize their chances for cure have been seeking. Bravo, Dr. Turner!
— Lissa Rankin, MD, New York Times bestselling author of Mind Over Medicine & host of the National Public Television special Heal Yourself: Mind Over Medicine

This book is filled with important information for everyone, whether struggling with cancer or not. She is giving the world a gift at such an important time as so many are feeling like they can’t take their lives into their own hands. Kelly empowers us all to do exactly that.
— Colleen Saidman, cofounder and codirector of Yoga Shanti

Kelly Turner delivers the message people addressing cancer -- or seeking to prevent it -- need to hear. Turner’s book gives you the support you need -- from science, tradition, and common sense -- to make powerful lifestyle changes that will tip the scales in your favor.
— Pamela Miles

“Radical Remission is a treasure trove of BIG TRUTH about the incredible healing power available to each and every one of us!”
— Christiane Northrup, M.D., ob/gyn physician and author of the ,New York Times bestsellers Women's Bodies, Women's Wisdom and The Wisdom of Menopause

“Radical Remission shows how we can shift the odds of remission in our favor. What I like most about this book is balance. Turner does not ask anyone to abandon conventional therapy, but instructs us on how to add healing factors that are often overlooked.”
— Larry Dossey, MD, author of One Mind: How Our Individual Mind Is Part of a Greater Consciousness and Why It Matters

Radical Remission is a personal and deeply moving exploration of the power of the human spirit and innate wisdom of the body to overcome catastrophic illness. Persons with cancer and their families and friends will find it especially helpful.
— Andrew Weil, M.D.

Kelly Turner is studying phenomena that is the very research and story sharing that will step us forward into solving the cancer plague. Kelly Turner writes as an accomplished scientist and as a compassionate human being to inspire us to question deeply the roots of our illnesses.
— Rodney Yee, author of Moving Toward Balance

Dr. Kelly A. Turner is a researcher, lecturer, and consultant in the field of integrative oncology. Her specialized research focus is the Radical Remission of cancer, which is a remission that occurs either in the absence of conventional medicine or after conventional medicine has failed. Dr. Turner has a B.A. from Harvard University and a Ph.D. from the University of California, Berkeley.