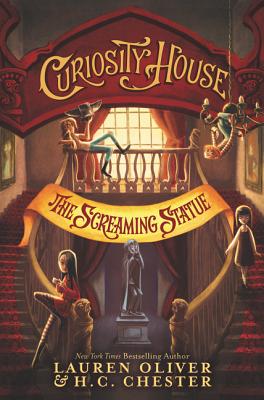 In this second book in the New York Times bestselling Curiosity House series by exceptional author Lauren Oliver and shadowy recluse H. C. Chester, four extraordinary children must avenge their friend’s death, try to save their home, and unravel the secrets of their past . . . before their past unravels them.

Pippa, Sam, Thomas, and Max are happy to be out of harm’s way now that the notorious villain Nicholas Rattigan is halfway across the country in Chicago. But unfortunately their home, Dumfreys’s Dime Museum of Freaks, Oddities, and Wonders, is in danger of closing its doors forever.

But their troubles only get worse. The four friends are shocked when their beloved friend, famous sculptor Siegfried Eckleberger, is murdered. As they investigate, they find clues that his death may be tied to the murder of a rich and powerful New York heiress, as well as to their own pasts.

This is the second book in the series and so boasts many wondrous and mysterious things inside, such as:

·       A cautionary tale about running with scissors

·       Nutritious and decidedly not delicious vegetables

·       A perfectly sweet bedtime story about a wayward bunny

·       Two wet kisses on the cheek from your aunt Mildred

Learn more about the series online at www.thecuriosityhouse.com.

“Oliver and Chester have created another quirky middle-grade mystery that will have no trouble drawing a crowd.”
— Booklist

PRAISE FOR CURIOISTY HOUSE: THE SHRUNKEN HEAD: “The continuous action, compelling mystery, and dark, brooding illustrations make this book impossible to put down. Perfect for kids who feel they’re different or those simply after a freakishly good time.”
— Booklist (starred review)

“Stupendous and stupefying! A riddle wrapped in a mystery inside a shrunken head. If you aren’t curious about Curiosity House, somebody must have pickled your brain and put it in a jar. Read this book immediately.”
— Pseudonymous Bosch, New York Times bestselling author of the Secret Series and Bad Magic

“Step right up! Step right up! Mystery, murder, curses, and sideshow freaks! Or are they superheroes? There’s only one way to find out... Read Curiosity House! You’ll be glad you did!”
— Adam Gidwitz, New York Times bestselling author of A Tale Dark and Grimm series

PRAISE FOR LIESL & PO: “A wonderfully imaginative, startlingly moving and at times wickedly funny fantasy. With nods to Dahl, Dickens, the Grimms and even Burnett, the author has made something truly original. Acedera’s frequent black-and-white illustrations are a perfect complement. An irresistible read: This book sings.”
— Kirkus Reviews (starred review)

PRAISE FOR LIESL & PO: “Classic fairy tale elements weave throughout this spirited, old-fashioned adventure. Invigorating and hopeful, this novel testifies to the power of friendship and generosity to conquer greed and depression.”
— Publishers Weekly (starred review)

PRAISE FOR THE SPINDLERS: “Richly detailed, at times poetic, ultimately moving; a book to be puzzled over, enjoyed and, ideally, read aloud.”
— Kirkus Reviews (starred review)

PRAISE FOR THE SPINDLERS: “This imaginative fantasy emphasizes individual initiative and the power of hope and friendship. With strong, self-reliant female characters and well-defined action, this is a strong addition to fantasy collections.”
— School Library Journal (starred review)