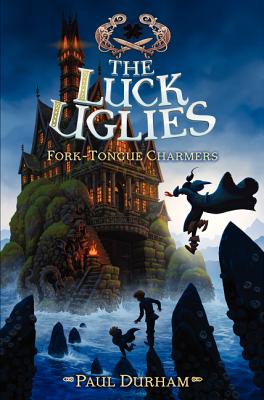 The Luck Uglies must face their greatest enemy in this second installment of the series that's a perfect match for fans of Chris Colfer's Land of Stories series and books by Kelly Barnhill. "There is not a single dull moment in this story. A total delight," raved Bookslist in a starred review!

Rye O’Chanter was shocked to discover that her father was the leader of the notorious band of outlaws known as the Luck Uglies. Now she too has been declared a criminal in her own village, and she must flee to the strange and remote Isle of Pest while her father faces off against the Luck Uglies’ bitter rivals, the Fork-Tongue-Charmers, on the mainland.

But all bets are off when the battle moves to the shores of Pest. To defeat the Fork-Tongue Charmers, Rye must defy a deranged earl, survive a test meant to judge the grit of the fiercest men, and lead the charge in defending the island against a strangely familiar enemy, which means uncovering some long-buried family secrets….

The first Luck Uglies book was named an ALA Notable Children’s Book as well as a New York Public Library Title for Reading and Sharing, and it won the Cybil Award for Middle Grade Speculative Fiction and a Sunshine State Young Readers Award.

★ “There is not a single dull moment in this story, which packs in as many clever twists and fully-fleshed characters as the first book. And the writing remains a total delight: witty, richly layered, and capable of creating a world as real as this one.”
— Booklist (starred review)

“Though enough questions are answered to satisfy readers, the cliffhanger ending will have them enthusiastically awaiting the final installment.”
— School Library Journal

This book packs plenty of action, and the plot takes some interesting twists and turns that will keep readers engaged. Fans of the previous volume will enjoy Rye’s new adventure, and those unfamiliar with first book will be able to jump right into this story.
— Voice of Youth Advocates (VOYA)

Praise for THE LUCK UGLIES: ★ “By turns funny and heart-stopping. A bona-fide page-turner.”
— Booklist (starred review)

“Paul Durham has created the best kind of fantasy world—one that is equal parts wondrous and deadly, and in which the line between heroism and villainy is deliciously blurred.”
— Christopher Healy, author of The Hero’s Guide to Storming Your Kingdom

“A magical, mist-shrouded world humming with danger and mystery.”
— Jonathan Auxier, author of The Night Gardener and Peter Nimble and His Fantastic Eyes

“For fantasy-lovers, The Luck Uglies has it all: a feisty heroine, monstrous creatures, and a brimful of horror and humour to keep the reader turning the pages.”
— Joseph Delaney, author of the Last Apprentice series

“Funny, magical, and absolutely crackling with those little sparks that make a book wonderful.”
— Stefan Bachmann, author of The Peculiar and The Whatnot

“If you are lucky enough to pick up this book, prepare for a wild ride!”
— Marissa Burt, author of Storybound and Story’s End
or
Not Currently Available for Direct Purchase
Copyright © 2020 American Booksellers Association