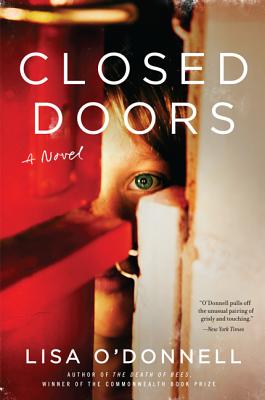 A young boy on a small Scottish island where everyone knows everything about everyone else, will discover that a secret is a dangerous thing in this tense and brilliant tale of from Lisa O'Donnell, the bestselling author of The Death of Bees, winner of the 2013 Commonwealth Book Prize.

Eleven-year-old Michael Murray is the best at two things: keepy-uppies and keeping secrets. His family thinks he's too young to hear grown-up stuff, but he listens at doors; it's the only way to find out anything. And Michael's heard a secret, one that might explain the bruises on his mother's face.

When the whispers at home and on the street become too loud to ignore, Michael begins to wonder if there is an even bigger secret waiting to be discovered. Scared of what might happen if anyone finds out, and desperate for life to be normal again, Michael sets out to piece together the truth. But he also has to prepare for the upcoming talent show, keep an eye out for Dirty Alice, his arch-nemesis, and avoid eating Granny's watery stew.

Closed Doors is a vivid evocation of the fears and freedoms of childhood and a powerful tale of love, the loss of innocence, and the importance of family in difficult times.

Lisa O'Donnell's debut novel, The Death of Bees, was the winner of the Commonwealth Book Prize. She won the Orange Prize for New Screenwriters for her screenplay The Wedding Gift. She lives in Scotland.

“Writing in a child’s voice is risky, but Lisa O’Donnell pulls it off in her second novel. . . . Ms. O’Donnell avoids triteness in this story of lost innocence, favoring candor and dark humor in the aftermath of violence.”
— New York Times

“There’s loss of innocence here, but the overwhelming tone is warm and sparky; O’Donnell shows how a shattered family can remake itself, and Michael’s narrative voice is delightful—observant, thoughtful, comical, and thoroughly believable.”
— Sunday Times (London)

“An engaging page-turner that effectively explores the trials and tribulations of childhood with warmth and humor.”
— Booklist (starred review)

“[O’Donnell] has fashioned yet another humane and compulsive read, grounded in a realism which, depicted through a child’s eyes—with that hint of a child’s surreal perception—gathers together violence, humor, and love in a most believable way.”
— Scotland on Sunday

“A skillfully told story of a boy’s struggle to come to terms with family secrets and their potentially terrible consequences. A sharp, witty, and heartbreaking second novel from a dynamic new talent.”
— Kitty Aldridge, author of A Trick I Learned from Dead Men

“Sweet and sad, this is a coming-of-age story with dark secrets—and love—at its heart.”
— Karen Campbell, author of This Is Where I Am

“Closed Doors demonstrates just as much skill, empathy and insight as its predecessor….Closed Doors is all about the voice—Michael’s 11-year-old world is entirely convincing….a hugely accomplished and engaging piece of storytelling.”
— Big Issue