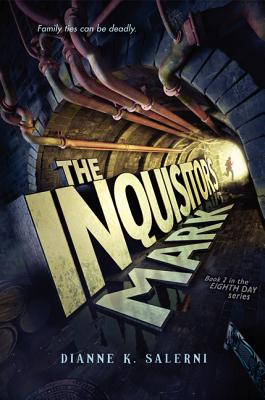 The sequel to The Eighth Day, a fantasy adventure that VOYA called "unparalleled" and "absolutely necessary for middle grades," continues with higher stakes, greater world building, and more pulse-pounding action. With suspense, danger, and new discoveries around every corner, this fast-paced fantasy series that Kirkus Reviews raved was an exciting blend of "modern intrigue and ancient magic" will be a welcome addition for fans of Percy Jackson and Harry Potter.

After an all-out battle in Mexico, Jax, Riley, and Evangeline have gone into hiding. There are still rogue Transitioners and evil Kin lords on the hunt for Riley, a descendant of King Arthur, and Evangeline, a powerful wizard with bloodlines to Merlin, in order to gain control over the Eighth Day.

So when Finn Ambrose, a mysterious stranger, contacts Jax claiming to be his uncle, Jax's defenses go up—especially after Jax learns that he's holding Jax's best friend, Billy, hostage. To rescue Billy and keep Riley and Evangeline out of the fray, Jax sneaks off to New York City on his own. But once there, he discovers a surprising truth: Finn is his uncle, and Jax comes from a long line of Dulacs—a notoriously corrupt and dangerous Transitioner clan who want Riley dead and Evangeline as their prisoner. And family or not, the Dulacs will stop at nothing to get what they want.

“Combining modern intrigue and ancient magic, this second volume in what continues to be an inspired series does not disappoint. Jax is an endearing mix of heroic and awkward as he struggles with his new identity. An exciting blend of Arthurian legend and organized crime.” — Kirkus Reviews

“Blending Arthurian legend with action-packed adventure, the second in the Eighth Day series answers some questions but leaves plenty dangling for the next book.” — ALA Booklist

“The concept and the characters are strong, and should continue to entertain its audience who will now eagerly await book three.” — School Library Journal

“[A] fast-paced, magical adventure. An unparalleled mix of evil villains, humor, and background that set this up for a likeable trilogy to be recommended for fans of Percy Jackson and Harry Potter. Absolutely necessary for middle grades.” — Voice of Youth Advocates (VOYA) (on The Eighth Day)