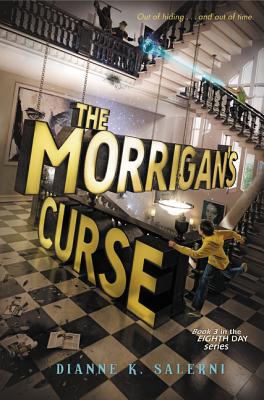 Adventure, action, and magic collide in the latest installment of the series that School Library Journal called "fast paced and exciting." In the third book of the series that VOYA recommends "for fans of Percy Jackson and Harry Potter," the war over the Eighth Day continues—and there's more at stake than ever before.

The battle between Kin and Transitioners that's been brewing for centuries has finally come to a head. The sinister Kin have captured Evangeline's younger sister, Addie, a descendant of Merlin whose presence will allow them to reverse the Eighth Day Spell and free themselves. Addie doesn't realize the full consequences of her cooperation. She's been helping the Kin because they value the strength of her magic—something Evangeline never did. The feeling of power coursing through her veins is impossible to resist.

Meanwhile, Riley, Evangeline, and Jax craft a plan to rescue Addie from her captors. But the Kin's unstoppable magic, and a rebellious Addie, force Riley to reconsider whether saving Addie is worth sacrificing everyone who lives in the seven-day week. Jax won't let Evangeline's sister be used as a pawn, so he risks it all in a secret mission of his own. With the Morrigan pushing both sides of the war toward annihilation, Addie must decide where her loyalties lie, while Jax, Riley, and Evangeline confront the possibility of losing Addie to save the world.

“Combining modern intrigue and ancient magic, this second volume in what continues to be an inspired series does not disappoint. Jax is an endearing mix of heroic and awkward as he struggles with his new identity. An exciting blend of Arthurian legend and organized crime.” — Kirkus (on The Inquisitor's Mark)

“Blending Arthurian legend with action-packed adventure, the second in the Eighth Day series answers some questions but leaves plenty dangling for the next book.” — ALA Booklist (on The Inquisitor's Mark)

“The concept and the characters are strong, and should continue to entertain its audience who will now eagerly await book three.” — School Library Journal (on The Inquisitor's Mark)

“[A] fast-paced, magical adventure. An unparalleled mix of evil villains, humor, and background that set this up for a likeable trilogy to be recommended for fans of Percy Jackson and Harry Potter. Absolutely necessary for middle grades.” — Voice of Youth Advocates (VOYA) (on The Eighth Day)