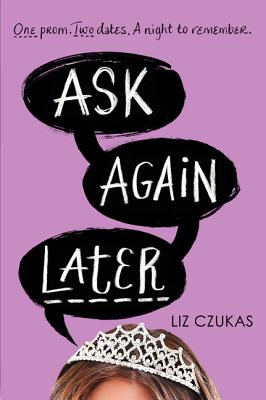 Heart LaCoeur has zero interest in a messy high-school romance, no matter what her name suggests. That's why she's decided to avoid prom angst by going with a group of single friends. And that's why, when two surprise prom invites derail her brilliant plan, Heart takes the only foolproof, drama-free solution: a coin flip—that somehow gives her the chance to live out both prom nights. Heads or tails, where they both end up might be the most surprising thing of all. . . .

“Breezy, witty, and charming with some serious swoon. You will heart Heart in this sprightly comedy of errors.”
— Huntley Fitzpatrick, author of My Life Next Door

“A hilarious romp. Heart is the kind of narrator you’ll love rooting for: self-deprecating, brutally honest, and charmingly quirky. A Molly Ringwald for the next generation. The only question you won’t need to ask again later is whether or not to read this book. The answer is yes.”
— Shaun Hutchinson, author of The Deathday Letter and FML

“Czukas’ debut is pure fun; at times, readers will feel as if in a John Hughes movie—and that’s a good thing.”
— ALA Booklist

Liz Czukas is a freelance writer living outside Milwaukee, Wisconsin. She is also the author of Ask Again Later. She collects college degrees she doesn't use, types too loud, and always has a song stuck in her head.