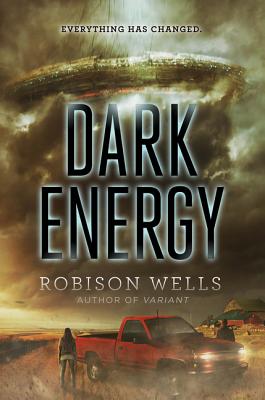 We are not alone. They are here. And there’s no going back. Perfect for fans of The Fifth Wave and the I Am Number Four series, Dark Energy is a thrilling stand-alone science fiction adventure from Robison Wells, critically acclaimed author of Variant and Blackout.

Five days ago, a massive UFO crashed in the Midwest. Since then, nothing—or no one—has come out.

If it were up to Alice, she’d be watching the fallout on the news. But her dad is director of special projects at NASA, so she’s been forced to enroll in a boarding school not far from the crash site. Alice is right in the middle of the action, but even she isn’t sure what to expect when the aliens finally emerge. Only one thing is clear: everything has changed.

“Wells is a veteran author whose home turf is science fiction, and his fans will recognize and appreciate his style, while newcomers will appreciate the humor and compulsive readability. Grab this, along with Wells’ other novels, for any collection.”
— ALA Booklist

“A seriously engaging action-adventure that stands on its own and leaves readers wanting more.”
— Voice of Youth Advocates (VOYA)

PRAISE FOR ROBISON WELLS: “This thoughtful, considered action-adventure will have readers pondering even after they’ve closed the book.”
— Kirkus Reviews

“Wells knows how to snare readers’ attention and hold them spellbound. There is no shortage of white-knuckle action.”
— Publishers Weekly (starred review)

“Variant should join the ranks of today’s must-read science fiction and fantasy series. A highly recommended addition to any collection for teens.”
— Voice of Youth Advocates (VOYA) (starred review)

“Benson’s account unfolds in a speedy, unadorned first person. Hard to put down from the very first page, this fast-paced novel answers only some of the questions it poses, holding some of the most tantalizing open for the next installment in a series that is anything but ordinary.”
— Kirkus Reviews

“Fans seeking a fast-paced, action-heavy read will find this generates a lot of excitement.”
— Bulletin of the Center for Children’s Books

“Picking up only moments after the first book ends, Feedback features the same nonstop, breathless pace, adding new dimension to old characters and new plot twists that are hard to see coming. An absorbing read that won’t let fans of the first down.”
— Kirkus Reviews
or
Not Currently Available for Direct Purchase
Copyright © 2020 American Booksellers Association