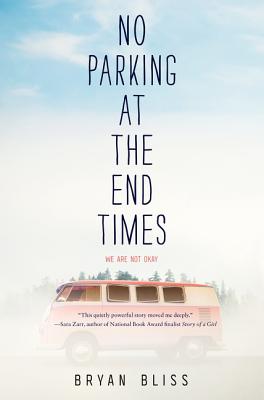 No Parking at the End Times (Hardcover)

Abigail's parents believed the world was going to end. And—of course—it didn't. But they've lost everything anyway. And she must decide: does she still believe in them? Or is it time to believe in herself? Fans of Sara Zarr, David Levithan, and Rainbow Rowell will connect with this moving debut.

Abigail's parents never should have made that first donation to that end-of-times preacher. Or the next, or the next. They shouldn't have sold their house. Or packed Abigail and her twin brother, Aaron, into their old van to drive across the country to San Francisco, to be there for the "end of the world." Because now they're living in their van. And Aaron is full of anger, disappearing to who-knows-where every night. Their family is falling apart. All Abigail wants is to hold them together, to get them back to the place where things were right.

But maybe it's too big a task for one teenage girl. Bryan Bliss's thoughtful debut novel is about losing everything—and about what you will do for the people you love.

Bryan Bliss is the author of We’ll Fly Away, Meet Me Here, and No Parking at the End Times. He holds master’s degrees in theology and fiction and works as a curriculum designer and developer. His nonfiction has been published in Image Journal, along with various other newspapers, magazines, and blogs. He lives in St. Paul, Minnesota, with his wife and two children.


Praise For No Parking at the End Times…

“This quietly powerful story of a young woman’s quest for deliverance in the face of parental failure, religious disillusionment, and self-doubt moved me deeply. I can’t wait to see what Bryan Bliss does next.”
— Sara Zarr, author of National Book Award finalist Story of a Girl

“Bliss’s debut explores family, sacrifice, and the power of everyday faith with a deft and sensitive hand.”
— Horn Book Magazine

“Abigail’s narration is smooth and authentic as she negotiates the complicated blend of anger and love she feels toward her parents.”
— Bulletin of the Center for Children’s Books

“Bliss has worked with teenagers, and it shows—his characters are not stereotypical “teens” but human beings who must face and overcome unique problems. A fine debut.”
— Minneapolis Star Tribune
or support indie stores by buying on
Copyright © 2020 American Booksellers Association