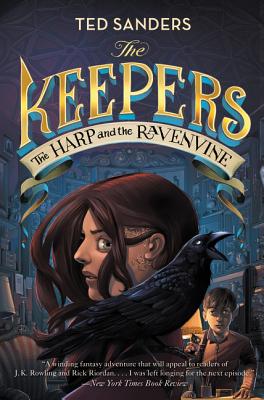 The Harp and the Ravenvine

Horace F. Andrews and his friend Chloe are Keepers of magical objects of extraordinary power.  But as the presence of a new Keeper is made known, they are drawn into a struggle to find out who she is and where her loyalties lie. A gripping sequel to The Box and the Dragonfly, the first book in Ted Sanders’s Keepers series, hailed by the New York Times Book Review as a “satisfying and original quest tale.”

As Horace and Chloe adjust to their newfound talents—Horace can see the future and Chloe can walk through walls—a girl called April is drawn toward the Keeper stronghold, the Warren. She comes with a Tan’ji of her own, though it is damaged and there is no telling what will happen if it cannot be made whole again. Accompanied by a mysterious woman with a power of her own and the young boy leading them in the right direction, April is being pursued by a pack of sinister hunters. Will she reach the Warren in time, and will it offer safety or only more danger?

Ted Sanders’s series has the feel of classic fantasy with a science fiction twist, and this second book, The Harp and the Ravenvine, will thrill readers with adventure, intrigue, and the unexpected at every turn.

Ted Sanders is the author of the short-story collection No Animals We Could Name, winner of the 2011 Bakeless Prize for fiction. His stories and essays have appeared in publications such as the Georgia Review, the Gettysburg Review, and The PEN/O. Henry Prize Stories anthology. A recipient of a 2012 National Endowment for the Arts Literature Fellowship, he lives with his family in Urbana, Illinois, and teaches at the University of Illinois at Urbana-Champaign. The Keepers is his first series for younger readers. You can visit him online at www.tedsanders.net.


Praise For The Keepers #2: The Harp and the Ravenvine…

Praise for The Keepers: The Box and the Dragonfly: “An epic adventure of self-discovery, magic, tragedy and blurred lines of loyalty for middle-grade lovers of fantasy.”
— Kirkus Reviews

“The magical world is full of detail and wonder. Fans of Harry Potter and Gregor the Overlander will find this one entertaining.”
— School Library Journal

“Sanders uses mystery, action, and suspense to intrigue readers. A rousing start for the Keepers series.”
— ALA Booklist

“Ted Sanders combines elements of the best classic fantasy adventures with ingenious twists that are all his own.”
— Caroline Carlson, author of The Very Nearly Honorable League of Pirates series

“The Keepers is a wildly original adventure, electric-paced and brain-bending, that will enthrall kids and adults alike. It’s more than a fantasy, building physics and folklore into its search to answer questions about whether true magic can ever exist.”
— Soman Chainani, author of the New York Times bestselling series, The School for Good and Evil
or support indie stores by buying on
(This book is on backorder)
Copyright © 2020 American Booksellers Association