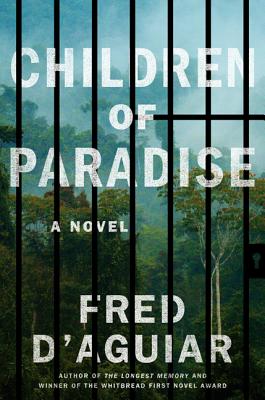 Acclaimed novelist, playwright, and poet Fred D’Aguiar has been short-listed for the T.S. Eliot Prize in poetry for Bill of Rights, his narrative poem about the Jonestown massacre, and won the Whitbread First Novel Award for The Longest Memory. In this beautifully imagined work of literary fiction, he returns to the territory of Jim Jones’s utopian commune, interweaving magical realism and shocking history into a resonant story of love, faith, oppression, and sacrifice in which a mother and daughter attempt to break free with the help of an extraordinary gorilla.

Joyce and her young daughter, Trina, are members of a utopian community ruled by a magnetic preacher. When Trina, plays too near to the cage holding the commune’s gorilla, Adam, the ape attacks and kills the child. Or so everyone believes. That night, the preacher dramatically “revives” her—an act that transforms Trina into a symbol of its charismatic leader’s God-like power. Desperate to save her daughter from the preacher’s control, the outspoken Joyce attempts a daring escape, a run for freedom aided by another prisoner—the remarkable Adam.

Told with a sweeping perspective in lush prose, shimmering with magic, and devastating in its clarity, Children of Paradise is a brilliant and evocative exploration of oppression—of both mind and body—and of the liberating power of storytelling.


Praise For Children of Paradise: A Novel…

“Fred D’Aguiar’s magnum opus. He takes a story we think we know, Jonestown, and transforms it into an even larger, yet more intimate tragedy. A book not to be missed.”
— Edwidge Danticat, author of Claire of the Sea Light

Poet, novelist and playwright, Fred D’Aguiar was born in London to Guyanese parents. He grew up in Guyana, returning to England in his teens. He trained as a psychiatric nurse before reading English with African and Caribbean Studies at the University of Kent, Canterbury. He is the author of five novels, including, Children of Paradise, about Jonestown, Guyana. His first novel, The Longest Memory (Pantheon, 1994), won both the David Higham Prize for Fiction and the Whitbread First Novel Award. His eight poetry book and most recent, Letters to America is a UK, Poetry Book Society Choice. His numerous plays have been staged in the UK and broadcast on BBC radio. He was awarded the Guyana Prize in Fiction and in Poetry and was Judith E. Wilson Fellow at Cambridge University. He has lived in the US since the 1990s and taught at Amherst College, University of Miami and Virginia Tech. Currently he is Professor of English at University of California Los Angeles.