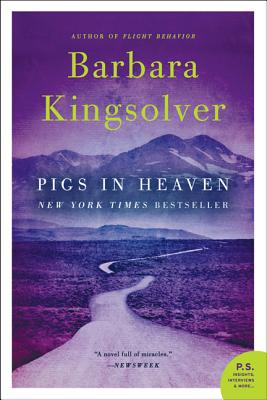 This edition includes a P.S. section with additional insights from Barbara Kingsolver, background material, suggestions for further reading, and more.


Praise For Pigs in Heaven: A Novel…

“A novel full of miracles.” — Newsweek

“Kingsolver makes you care about her characters to the point of tears; she is bitingly funny—and she writes like a dream.” — San Francisco Chronicle

"Possessed of an extravagantly gifted narrative voice, Kingsolver blends a fierce and abiding moral vision with benevolent concise humor. Her medicine is meant for the head, the heart and the soul." — New York Times Book Review

“That rare combination of a dynamic story told in dramatic language, combined with issues that are serious, debatable and painful...[it’s] about the human heart in all its shapes and ramifications.” — Los Angeles Times Book Review

“There is no one quite like Barbara Kingsolver in contemporary literature. Her dialogue sparkles with sassy wit and the earthy poetry of ordinary folks’ talk; her descriptions have a magical lyricism rooted in daily life but also on familiar terms with the eternal.” — Washington Post Book World