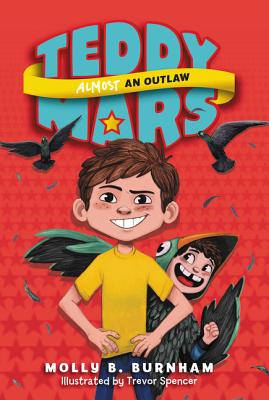 Teddy goes from record breaker to rule breaker in this conclusion to the hilarious and heartwarming series by the winner of the 2016 Sid Fleischman Humor Award.

Told in short, accessible sections with fun lists and rambunctious illustrations, the heartwarming Teddy Mars series is perfect for reading aloud. Teddy’s never-give-up attitude will have readers laughing out loud and striving to break world records of their own.

Just like world records, some rules are made to be broken. When Teddy’s great-aunt Ursula moves in, she makes rules about everything from juice to The Guinness Book of World Records to being a good big brother. At first, Teddy is excited. Maybe she’ll finally end The Destructor’s reign of terror! But when Aunt Ursula’s newest rule, PIGEONS ARE NOT PETS, puts the neighborhood pigeons in danger, Teddy may have to bend a few rules to save them.

Praise for TEDDY MARS: ALMSOT A WINNER: “Teddy’s fresh perspective, aided by spot-on middle-grade humor… will win over readers in no time flat.” — Bulletin of the Center for Children’s Books

“Young readers with siblings will identify with Teddy’s realistic struggles with his younger brother and older sisters. Short chapters and the subject matter make this a perfect book for reluctant readers as well as those who enjoy a laugh. Here’s hoping for more Teddy Mars adventures!” — School Library Journal

“A hilarious story that revolves around school, friends, and family.” — Booklist

“Teddy Mars is the everyman kind of anti-hero, with a stubborn hope and determination to find his own place in the world. It is this quality of resilience in the face of adversity... that makes him such an irresistible and adorable character who is easy to root for.” — Johanna McKenna M.Ed., for The Nerdy Book Club

“This heartwarming story starts the Teddy Mars series on a hilarious foot, tracing one boy’s struggle to stand out in a big family, one failed record-breaking attempt after another. Once the wreckage is cleared, what’s left is a loving family that celebrates one another for exactly who they are.” — Booklist

“Teddy is so amiable and put-upon, he’ll find plenty of fans who’ll want to read more in the promised series.” — School Library Journal

“There’s a lot to love here: a quirky family, an eccentric next door neighbor, best friends, and a dream come true.” — Literacy Daily

Molly B. Burnham has been a dog walker, ice-cream scooper, and elementary school teacher. She lives in Massachusetts with her husband, two daughters, and a dog named Pepito. Pigeons really do live next door to her. Sadly, Grumpy Pigeon Man does not. Molly earned an MFA in children's writing from Hamline University. This is her first book, but not her last. She has not broken a world record—yet!

Trevor Spencer loves animated films almost as much as Teddy Mars loves world records. Trevor fills his days with making toys and drawing books with his lovely wife in California. His evenings are dedicated to bringing Teddy Mars to life, and he couldn't be happier.