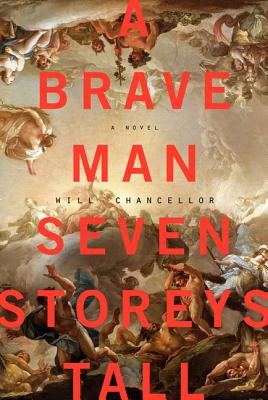 A beautiful and compulsively readable literary debut that introduces Owen Burr—an Olympian whose dreams of greatness are dashed and then transformed by an epic journey—and his father, Professor Joseph Burr, who must travel the world to find his son.  After his athletic career ends abruptly, Owen flees the country to become an artist. He lands in Berlin where he meets a group of art monsters living in the Teutonic equivalent of Warhol’s Factory. After his son’s abrupt disappearance, Burr dusts off his more speculative ideas in a last-ditch effort to command both Owen’s and the world's attention.   A Brave Man Seven Storeys Tall offers a persuasive vision of faith, ambition, art, family, and the myths we write for ourselves.

Will Chancellor grew up in Hawaii and Texas, and lives in New York City. This is his first novel.


Praise For A Brave Man Seven Storeys Tall: A Novel…

“I fell in love…remind[s] me of the potential of literature… It is a novel that could only be written by one person, at one particular time…the most ‘alive’ book I’ve read this year.”
— John Warner, The Chicago Tribune

“Chancellor pulls you into his universe, and even if you could get out, you wouldn’t want to.”
— Interview

“To compare a debut novel to Infinite Jest is likely either too flippant or too generous, but consider the bona fides...Will Chancellor’s wonderful debut novel...more than merely promising, is one of the best of the year.”
— Daily Beast

“Wry, smart, tender, huge-hearted, Will Chancellor strides onto the page in the spirit of Bellow with writing poised like poetry. A dauntless debut.”
— Paul Lynch

“A globetrotting, witty, powerful and wildly ambitious novel that is at once a psychological journey and a terrific page-turner. Will Chancellor has an electrifying, deeply original voice, and his book is so full of depth and heart that it’s impossible to put down.”
— Molly Antopol, author of The UnAmericans

“Owen Burr is a character unlike any you’re likely to meet in contemporary literature. Watching him move through the world, and negotiate with his own dreams, is both powerful and revelatory.”
— Daniel Alarcón

“Simply one of the year’s finest books.”
— Largehearted Boy

“Chancellor shows great poise and command with this elegant and highly enjoyable first novel, which suggests that he has even more greatness to offer us.”
— Flavorwire

“Chancellor writes in the established tradition of the American absurd, from Pynchon and Gaddis to DeLillo and Foster Wallace. Chancellor may be swinging for the former pair, but lands firmly, and thereby accessibly, in the latter.”
— BookPage

“Elegantly intertwines the spiritual and geographical journeys that father and son take in pursuit of fulfillment. This fusion succeeds in enriching both characters, as their trials and aspirations often run parallel. Chancellor has a wonderful ear for dialogue, and a keen understanding of how insecurity and ambition intersect.”
— Ploughshares

“Wonderful passages of vivid prose and pungent dialogue occur throughout “A Brave Man Seven Storeys Tall,” … The marvelous Iceland chapters — earthy and ruefully funny, warm yet coolly aware of absurdity — suggest that [Will Chancellor] is already on his way [to growing up].”
— Washington Post

“A Brave Man Seven Storeys Tall...immediately asserts Chancellor as a promising new voice with the ambition and talent to take him anywhere.”
— Tweed's
or
Not Currently Available for Direct Purchase
Copyright © 2020 American Booksellers Association