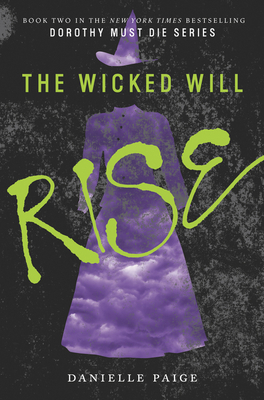 The Wicked Will Rise (Dorothy Must Die #2)

In this New York Times bestselling sequel to Dorothy Must Die, who is good—and who is actually Wicked? The Wicked Will Rise is perfect for fans of richly reimagined fairy tales and classic tales like Marissa Meyer’s Lunar Chronicles and Gregory Maguire’s Wicked.

My name is Amy Gumm—and I’m the other girl from Kansas. After a tornado swept through my trailer park, I ended up in Oz. But it wasn’t like the Oz I knew from books and movies. Dorothy had returned, but she was now a ruthless dictator. Glinda could no longer be called the Good Witch. And the Wicked Witches who were left? They’d joined forces as the Revolutionary Order of the Wicked, and they wanted to recruit me.

My mission? Kill Dorothy. Except my job as assassin didn’t work out as planned. Dorothy is still alive. The Order has vanished. And the home I couldn’t wait to leave behind might be in danger.

Somehow, across a twisted and divided land, I have to find the Order, protect the true ruler of Oz, take Dorothy and her henchmen down—and try to figure out what I’m really doing here.


Praise For The Wicked Will Rise (Dorothy Must Die #2)…

PRAISE FOR DOROTHY MUST DIE: “Readers of Baum’s books will take special delight in seeing new twists on the old characters, and they will greet the surprise climactic turnabout with the smugness of insiders.” — Kirkus Reviews

“Dorothy Must Die is kind of the ultimate in girl-powered literature. You’ve got empowered heroines, sure, but Paige also conjures a formidable villainess in Dorothy and some manipulative lady revolutionaries. Here, women and girls are allowed to be anything. This really is a woman’s world.” — Nerdist.com

“Gone are the days of rainbows, Lollipop Guilds and pretty much anything to sing about in a major key. For those willing to go on a quest with a heroine more attuned to our times than the Dust Bowl era, there’s no place like it.” — USA Today

“Debut author Paige doesn’t hold back in this fast-paced action novel. Give this cinematic upper-YA novel to fans of A. G. Howard’s Splintered, Frank Beddor’s Looking Glass Wars, and TV shows such as Once Upon a Time and Grimm.” — School Library Journal

“Paige is creating a rather brilliantly twisted version of the familiar world of Oz.” — Bulletin of the Center for Children’s Books

“Paige has embellished upon the original Wizard of Oz story to create a completely new, even more bizarre Oz and cast of characters. Her world building is fascinating.” — Booklist

“For anyone who likes a good story turned on its head, Dorothy Must Die is a must-read.” — Huffington Post

“The Wizard of Oz as you’ve never seen it.” — Teen Vogue

“This sequel doesn’t lose its momentum one bit…you’ll be begging for book three.” — PopCrush.com's "Best YA Books of 2015 (So Far!)"