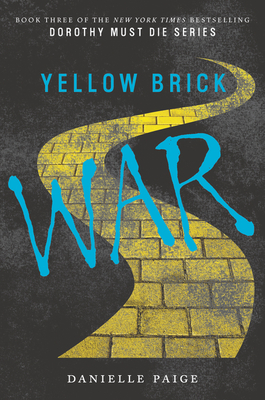 My name is Amy Gumm. Tornadoes must have a thing about girls from Kansas, because—just like Dorothy—I got swept away on one too. I landed in Oz, where Good is Wicked, Wicked is Good, and the Wicked Witches clued me in to my true calling: Assassin.

The only way to stop Dorothy from destroying Oz—and Kansas—is to kill her. But I failed. Others died for my mistakes. Because of me, the portal between the worlds has been opened. And if I don’t find a way to close it?

Dorothy will make sure I never go home again.

Now it’s up to me to: join the Witches, fight for Oz, save Kansas, and stop Dorothy once and for all.

Praise for the DOROTHY MUST DIE series: “Readers of Baum’s books will take special delight in seeing new twists on the old characters, and they will greet the surprise climactic turnabout with the smugness of insiders.”
— Kirkus Reviews

“Dorothy Must Die is kind of the ultimate in girl-powered literature. Here, women and girls are allowed to be anything.”
— Nerdist.com

“Paige doesn’t hold back in this fast-paced action novel. Give this cinematic upper-YA novel to fans of A. G. Howard’s Splintered, Frank Beddor’s Looking Glass Wars, and TV shows such as Once Upon a Time and Grimm.”
— School Library Journal

“Paige is creating a rather brilliantly twisted version of the familiar world of Oz.”
— Bulletin of the Center for Children’s Books

“Paige has embellished upon the original Wizard of Oz story to create a completely new, even more bizarre Oz and cast of characters. Her world building is fascinating.”
— Booklist