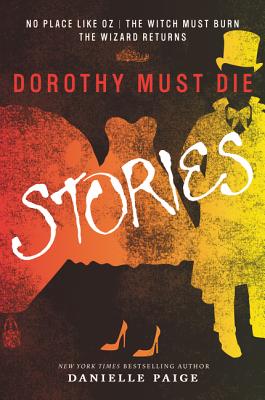 No Place Like Oz, The Witch Must Burn, The Wizard Returns (Dorothy Must Die Novella)

A collection of three prequel novellas to the New York Times bestselling Dorothy Must Die series by Danielle Paige!

These three prequel novellas to the New York Times bestselling Dorothy Must Die series follow the iconic characters from the beloved classic The Wizard of Oz as their lives intertwine to bring about the downfall of Oz. Dorothy begins a journey down a darker path. Glinda the Good Witch may not be so Good. And the Wizard realizes that Oz is his destiny. Kiss the land where troubles melt like lemon drops goodbye. Here there's danger around every corner and magical shoes won't be able to save you.

Long before Amy Gumm got swept away from a Kansas trailer park . . . Dorothy Gale received a mysterious package on the night of her 16th birthday: a pair of red high-heeled shoes. And with a knock of her heels, Dorothy returned to the magical land that made her a star—and Oz would never be the same again.

PRAISE FOR DOROTHY MUST DIE: “Gone are the days of rainbows, Lollipop Guilds and pretty much anything to sing about in a major key. For those willing to go on a quest with a heroine more attuned to our times than the Dust Bowl era, there’s no place like it.
— USA Today

“Readers of Baum’s books will take special delight in seeing new twists on the old characters, and they will greet the surprise climactic turnabout with the smugness of insiders.”
— Kirkus Reviews

“Dorothy Must Die is kind of the ultimate in girl-powered literature. You’ve got empowered heroines, sure, but Paige also conjures a formidable villainess in Dorothy and some manipulative lady revolutionaries. Here, women and girls are allowed to be anything. This really is a woman’s world.”
— Nerdist.com

“Debut author Paige doesn’t hold back in this fast-paced action novel. Give this cinematic upper-YA novel to fans of A. G. Howard’s Splintered, Frank Beddor’s Looking Glass Wars, and TV shows such as Once Upon a Time and Grimm.”
— School Library Journal

“[Dorothy Must Die] strikes a similar tone to Marisa Meyer’s Cinder series, with its blend of fantasy, humor, and horror, and it will likely inspire fans of that series to make their way to the Emerald City.”
— Bulletin of the Center for Children’s Books

“Paige has spirited readers back to The Wizard of Oz. It’s a classic made more sinister.”
— ALA Booklist
or support indie stores by buying on
Copyright © 2020 American Booksellers Association