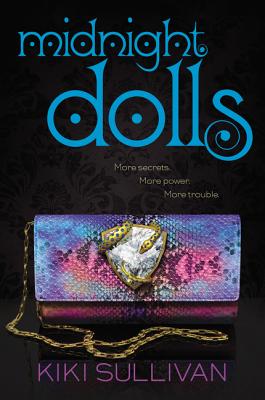 It's only been a couple of months since Eveny Cheval discovered that she's a powerful queen of zandara, the voodoo-like form of magic that has controlled the town of Carrefour for generations. She barely has time to consider what this means, though, before she's attacked by the murderous anti-magic organization Main de Lumière.

Alarmed, her powerful father—who has returned to Carrefour to protect Eveny—takes her and her sister zandara queens, Peregrine and Chloe, to his home on mysterious Caouanne Island. But the island holds its own secrets about Eveny's past—and her future. Now she's torn between two magical traditions—and two boys: strong and silent Caleb, who's pushing her away, and charismatic Bram, who seems too good to be true.

With Main de Lumière closing in and Carrefour's defenses crumbling, Eveny, her sister queens, and the townspeople she's supposed to protect are in danger. And as the revelations about her past continue to unfold, Eveny begins to realize that she might just be the only one who can save them all. She'll have to fight for the people and the town she loves—and for her own life.

“Fans of The Dolls will be quite satisfied with this installment and eager to see what’s next.”
— Kirkus Reviews

“Weaving in a smoldering romance with Caleb, Eveny’s protector, Sullivan’s words cast a spell to make readers flip pages faster than before.”
— Booklist

Kiki Sullivan is the author of The Dolls. Like her main character, Eveny Cheval, Kiki used to live in New York and now calls the American South home. Unlike Eveny, she finds it impossible to keep her rose garden alive and has been singlehandedly responsible for the unfortunate demise of countless herbs. She may or may not have hung out with queens of the dark arts, strolled through creepy New Orleans cemeteries at night, and written this series with a redheaded Louisiana voodoo doll beside her computer.