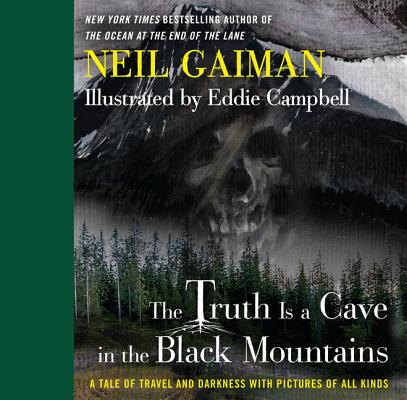 The Truth Is a Cave in the Black Mountains (Hardcover)

A Tale of Travel and Darkness with Pictures of All Kinds

Cover artist Eddie Campbell created the Bacchus comic series and the semiautobiographical Alec graphic novels, and is the artist behind From Hell (created with Alan Moore). Campbell lives in Australia. The print and ebook editions of The Truth is a Cave in the Black Mountains include Campbell’s original art throughout.


Praise For The Truth Is a Cave in the Black Mountains: A Tale of Travel and Darkness with Pictures of All Kinds…

“There is a stark simplicity in Mr. Gaiman’s prose in this deceptively dark tale of how far men will go to achieve their heart’s desire only to find that the achievement pales in comparison to the desiring.”
— Pittsburgh Post-Gazette

“Gaimain (Anansi Boys) has crafted a fresh story of magic, humanity, loyalty, and memories ‘waiting at the edges of things,’ where lost innocence can be restored as long as someone is willing to bear the cost.”
— Publishers Weekly (starred review) on THE OCEAN AT THE END OF THE LANE

“A terrifying shift in the nature of things lies at the heart of Neil Gaimain’s rich new novel.”
— The Guardian on THE OCEAN AT THE END OF THE LANE

“Poignant and heartbreaking, eloquent and frightening, impeccably rendered, it’s a fable that reminds us how our lives are shaped by childhood experiences, what we gain from them and the price we pay.”
— Kirkus Reviews (starred review) on THE OCEAN AT THE END OF THE LANE

“[T]here isn’t much Gaiman can’t do when it comes to writing.”
— Denver Post on ANANSI BOYS

“A hybrid of folk tale and farce that freely partakes of the comic wealth in each, slipping effortlessly back and forth between them . . . Anansi Boys is Gaiman’s tribute to [Anansi’s] trickster spirit, as nimble and resourceful as his own imagination.”
— Salon on ANANSI BOYS

“Original, engrossing, and endlessly inventive; a picaresque journey across America where the travelers are even stranger than the roadside attractions.”
— George R. R. Martin on AMERICAN GODS
or support indie stores by buying on
Copyright © 2020 American Booksellers Association