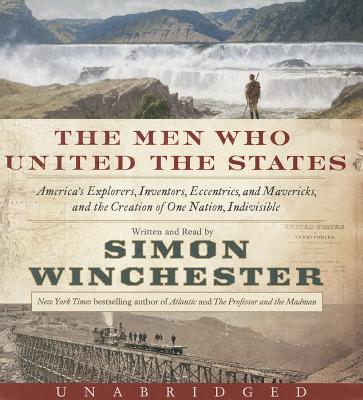 The Men Who United the States

America's Explorers, Inventors, Eccentrics and Mavericks, and the Creation of One Nation, Indivisible

For more than two centuries, E pluribus unum--Out of many, one"--has been featured on America's official government seals and stamped on its currency. But what unified a growing number of disparate states into the modern country we recognize today?

Simon Winchester follows the footsteps of America's most crucial innovators, thinkers and explorers, from Lewis and Clark, to the builders of the first transcontinental railroad and the curmudgeonly civil engineer who oversaw the creation of more than three million miles of highway. Winchester travels across vast swaths of the American landscape, from Pittsburgh to Portland, Seattle to Anchorage and Truckee to Laramie, using the five classical elements--Wood, Earth, Water, Fire, and Metal--to chart the contributions these adventurous leaders made to connect the diverse communities within the United States and ensure the future of the American project begun in 1776.

The Men Who United the States is an unforgettable journey of unprecedented scope across time and open spaces, providing a new lens through which to view American history, led by one of the most gifted writers.